The Eureka Public Marina is located at 500 West Waterfront Drive. The Marina includes 150 boat moorage slips that accommodate vessels from 20-70 feet in length. Amenities include a two lane launch ramp, fish cleaning station, parking area, public restroom, tenant shower building with coin operated laundry machines, and a waste oil disposal facility.  Water and electricity is provided to each slip. The Marina Office is located at the west end of the complex in the Wharfinger Building at #1 Marina Way. 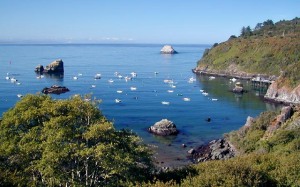 TRINIDAD HARBOR: Trinidad Harbor, a small cove E of Trinidad Head, affords shelter in NW weather, but is dangerous in W or S weather. The cove is small and is further constricted by several rocks, and, as a rule, there is always a swell even in N weather. It is used by fishing boats to a considerable extent during the summer, even though the holding ground is only fair. A white lighthouse structure, a memorial containing the original oil-burning light used at Trinidad Head until 1948, is at the center of the bluff on the N side of the harbor.

Anchorages & Dockage
A pier with a bait and tackle shop, and restaurant is located in the bight W of Little Head. A small marine railway near the foot of the pier is used for launching and retrieving small craft up to 25 feet long and 8½ feet wide. A beach boat launch is located on the E side of the marine railway. A water taxi is available during the summer months and a floating pier is provided to access the main pier during the months of May through September. Gasoline, marine supplies, and ice are available in Trinidad, a town on the north shore of the cove. The harbor monitors VHF-FM channel 78.

RIVERS:
Mattole River
The Mattole is a remote, free flowing river with no dams and a wild population of steelhead. It is located in the Southwest corner of Humboldt county, about 65 miles south of Eureka and 260 miles north of San Francisco. There are approximately 26 miles of fishable water from the mouth to the town of Honeydew. The fish of this river are wild with no hatchery fish being introduced. Catch and Release is asked for these fish.

Eel River
The primary fish of interest for the Eel include steelhead, chinook, Coho, and sea-run cutthroat trout. Chinook start coming into the river in August. They tend to hold in the waters below Ferndale Bridge until rains allow them upstream. The run is from August through December, with the peak in late October. The Eel flows through some of the most beautiful redwood groves in the state, including Humboldt Redwood State Park. Winter steelhead are what the Eel River is known for. The winter steelhead start moving into the river in November running through March, with peak activity during January. The average Eel steelhead runs 8-10 lbs, with fish to 16-lbs common and a number of fish in the 20-lb class caught each year.

Van Duzen River
A tributary, entering the Eel at Alton, and like the Eel it’s noted for good runs of salmon and steelhead. Runs coincide with the Eel.

Mad River
The Mad River is located 15 miles north of Eureka in Humboldt County. It originates at Ruth Lake about 100 miles to the southeast. The species of the Mad include steelhead, chinook and Coho salmon, and resident trout. The Mad has become known for its excellent winter steelhead, due in large part to the operation of the Mad River Fish Hatchery, which is located one mile southeast of Blue Lake on the south side of the river.

Trinity River
The Trinity River is world-famous for its fine steelhead and salmon fishing, as well as for trophy brown trout. Chinook salmon are the most sought-after gamefish in the Trinity River system. Spring-run salmon begin to enter the river in May and provide trophy fishing through November throughout the river. Although brown trout are not native to the Trinity River, they were heavily stocked until the late 1970s. Today, a wild population continues to the upper river, providing fly and bait fishing for mostly 10- to 14-inch fish, although an occasional trophy to 10 pounds is sometimes landed. The upper two miles of the river, from Lewiston Dam down to the Old Lewiston Bridge, is open only to fly-fishing.

Klamath River
The Klamath River is the largest of the North Coast rivers of California stretching over 200 miles from its mouth to the Oregon border. Its mouth is located 60 miles north of Eureka and 20 miles south of Crescent City off Hwy 101. The fish of the Klamath are king and silver salmon, steelhead, and resident trout. The kings start running in July with the best action near the mouth coming in August and running through September. Summer/Fall steelhead start running from late summer through October. The winter run starts in November and goes through February.
CLICK HERE for Map.

Smith River
The wild and majestic Smith River is located on the Pacific coast of northern California near the Oregon border. It was named for the explorer Jedediah Smith. The free flowing, emerald-green waters of the Smith River are none like you’ve ever seen before. The Smith is the largest wild and scenic river in the United States that has been left un-dammed. No gas-powered crafts are allowed on this river. The Smith River may only be 25 miles long but it is still the largest river system in California that flows freely along its entire course. The Smith Steelhead are among the largest in the state and the river holds the record at 27 plus lbs. The Rowdy Creek fish hatchery supplement the natural runs of both Steelhead and Salmon. The best time to fish for Steelhead at the Smith is during the Winter season from December to April. Steelhead begin to enter the system behind the November/December Fall run of Salmon. The Smith is also home to cutthroat trout.

LAGOONS
Located between Trinidad & Orick along Hwy 101 is a magical collection of landlocked waters, right on the coast but protected from the Pacific Ocean. The Humboldt Lagoons are a unique ecosystem providing unlimited outdoor recreation!

Big Lagoon and Stone Lagoon are brackish because their ocean barriers are breached by storms nearly every winter and are a favorite fishing spot for cutthroat trout and steelhead.

Freshwater Lagoon does not get breached and is open all year featuring rainbow trout and black bass.

PLEASE CONSULT THE CALIFORNIA DEPARTMENT OF FISH AND GAME FOR CURRENT REGULATIONS; EUREKA OFFICE 707-445-6493 or visit their website at http://www.dfg.ca.gov/Fishing/