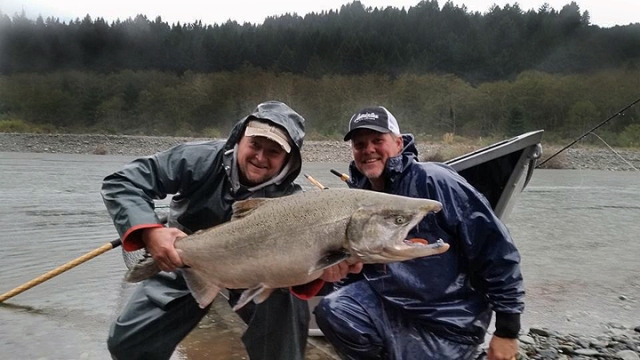 Rain is falling, and it sounds like plenty more is on the way. And if the amounts predicted come to fruition, we could see all of the North Coast rivers that are subject to low flow closures opened up to fishing as early as Friday, or possibly even Thursday. The exception would be the Smith River, which opened up on Monday. Forecasted rainfall totals through the weekend look pretty impressive. In the Smith basin, three inches are slated to fall through Friday morning with another three inches predicted to accumulate from Saturday’s storm. In Humboldt County, the forecast is calling for roughly three inches combined from two systems, which should taper off by Sunday afternoon. This is welcome news for the salmon that have been trapped in the estuaries of rivers like the Eel, Mad, and Redwood Creek. The rain should also aid the salmon and steelhead as they head up the tributaries along the Klamath and Trinity rivers.

Klamath re-opens above I-5
On Friday, Oct. 24, the Klamath River from the Interstate 5 bridge up to Iron Gate Hatchery reopens to the take of Chinook salmon over 22 inches. The Iron Gate Hatchery has met the 8,000 adult fish number needed for spawning purposes. This means anglers can keep one Chinook over 22 inches as part of the three-fish daily bag limit in this section of the Klamath River.

Weekend Weather
A couple pretty wet systems are set to roll through the North Coast according to Reginald Kennedy of Eureka’s National Weather Service. The first will have started Wednesday and should stick around through Thursday. “We could see up to 3 inches of rain in the Smith basin, the Eel and Van Duzen around an inch and a half, and Redwood Creek may see 2 inches. All the rivers should see a fairly significant rise,” Kennedy added. After a break on Friday, the next round of rain will be here Friday night and will linger until Sunday morning. “Rainfall totals for the weekend should be similar to the first system.” After a break on Sunday afternoon through Monday, the next system will arrive on Tuesday according to Kennedy. “Next week looks to be wet as well,” Kennedy said.

The Rivers:
Smith River
According to Mike Coopman of Mike Coopman’s Guide Service, the Smith was in good shape on Tuesday and quite a few fish were caught. He said, “The rise on Tuesday brought in quite a few new fish, and there were lots of jacks around as well. There were also quite a few fish that had been in the river for a while. Overall, the fishing was really good; we probably hooked roughly 20 fish, including some nice bright ones to take home. I’m a little uncertain what’s going to happen with the rain that’s forecasted for the next several days. If it goes as high as predicted, it will certainly rejuvenate the river and move the fish around. There may be a window on Friday morning, but conditions should be ideal early next week.”

River Closures
As of Wednesday evening, all the North Coast rivers, except the Smith, that are subjected to low flow fishing closures, including the Eel, Mad, Redwood Creek, and Van Duzen were closed. Sections of rivers that are open include the main stem Eel River from the paved junction of Fulmor Road to its mouth, the main stem Mad River from the Hammond Trail Railroad Trestle to its mouth. The Mattole, also falls under low-flow regulations, but doesn’t open to fishing until Jan. 1

The CDFW will make the information available to the public no later than 1 p.m. each Monday, Wednesday and Friday as to whether any river will be closed to fishing. The rivers can be opened up at anytime. The low flow closure hotline for North Coast rivers is (707) 822-3164.

Klamath
Lower Klamath
The Klamath has been on the rise since earlier this week, but it remained fishable. Fresh fish were still entering the river according to the CDFW fish counters. The few boats that were out reported adult salmon, jacks as well as steelhead this week. With rain forecasted for the next several days, the river will most likely blow out.

Trinity
Upper
Steve Huber of Steve Huber’s Guide Service reports there’s quite a few fish holding down in the Junction City area. He said, “Those fish are holding, waiting for rain and probably bound for the South Fork and some of the lower tributaries. We’re getting anywhere between three to five fish per trip working the Douglas City area down to Del Loma. There are a few fresh fish around, but not many. Most of the fish we’re seeing are colored up. There’s quite a few silvers spread throughout the river, and we’re starting to see some fresh steelhead make it up.”