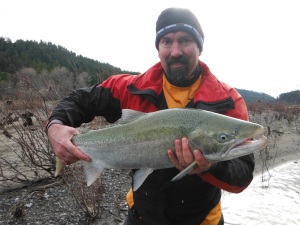 After last weekends large storm blew out and turned to mud every North Coast river from Piercy to Brookings, steelhead anglers were back to square one this week — aka the Smith River. The quick-clearing Smith went from near monitor stage over the weekend to emerald green and driftable by Wednesday. And it certainly drew a crowd, which tends to happen when you’re the only game in town. The good news is the Chetco will be right behind it and should be in fishable shape by Friday, relieving some of the boat pressure from the Smith. The top end of the South Fork Eel and Trinity could come into play by late this weekend, with the Mad, Redwood Creek, Van Duzen, and main Eel all rounding into fishable shape sometime next week. In the meantime, if steelhead fishing is part of your weekend itinerary, the Smith and Chetco will be your best bet.

Weekend Weather
After last weekend’s storm, we’re in for a bit of a dry spell for the next several days according to Reginald Kennedy of Eureka’s National Weather Service. “As of Wednesday, I don’t see any change in the pattern until possibly next Wednesday. The ridge of high pressure is pushing all the storms to the north and will continue to do so until next week,” Kennedy added.

CDFW Wins Lawsuit Defending Attack on Hatcheries
The California Department of Fish and Wildlife (CDFW) was victorious in the Third District Court of Appeal on Tuesday when the court upheld the agency’s statewide Environmental Impact Report (EIR) on its hatchery and fish stocking program according to a press release issued on Wednesday.

The release stated that in 2006, CDFW embarked on a years-long, multimillion dollar public process to create the statewide EIR for the hatchery and stocking program, which had been providing recreational fishing opportunities along with economic opportunities for related businesses to California’s anglers for more than 100 years.

Once it was completed and filed in January of 2010, two groups attacked the EIR and the CDFW program in Superior Court alleging that the EIR was insufficient under California Environmental Quality Act (CEQA) standards. They lost that case and then appealed that loss. Yesterday, the court found that the measures adopted by CDFW in 2010 are comprehensive and sufficiently protective of the state’s natural resources while providing recreational opportunities to anglers. The court found for CDFW and against the plaintiffs on all CEQA allegations. This victory by CDFW means hatchery operations will continue to benefit anglers across the state without further modifications, unless the losing parties choose to appeal. For more information, visit https://cdfgnews.wordpress.com/2015/02/11/cdfw-wins-lawsuit-defending-attack-on-hatcheries.

CDFW salmon meeting coming Feb. 26
The California Department of Fish and Wildlife’s Annual Salmon Information meeting will be held Feb. 26 from 9 a.m. to 3 p.m. at the Sonoma County Water Agency, 404 Aviation Blvd., Santa Rosa. The public is invited to attend CDFW’s annual meeting on the status of California salmon populations and the outlook for 2015 ocean salmon fisheries. For more information, please contact Kandice Morgenstern at 707-576-2879 or kandice.morgenstern@wildlife.ca.gov.

The Rivers:
Chetco River
The Chetco was still big as of Wednesday, flowing at 6,700 cfs in the afternoon. Reportedly there was less than a foot of visibility, meaning it probably won’t be driftable until Friday. There was no shortage of plunkers on the river, but reports were hard to come by.

Smith River
The Smith dropped back into driftable shape on Wednesday, and the scores were all over the place reports guide Mike Coopman. “It was hard to tell if there were a lot of fish around. We had a really good day, but some of the other boats had a tough go. It’s possible there weren’t a lot of fish around and we just happened to get our baits in the right spots. The river is in great shape, and the fishing should only get better once more of the boats move over to the Chetco,” Coopman said.

Eel River (main stem)
The main stem is a longs ways from fishable reports Paul Grundman of Rio Dell’s Grundmans Sporting Goods. “I’m guessing it’s going to be at least another 10 days before the main is fishable. If the weather remains dry, it might be good next weekend,” Grundman added.

Eel River (South Fork)
According to Grundman, the top of the south fork, above the East Branch, could be fishable by the weekend. The Sylvandale area should drop in early next week.

Van Duzen
The Van Duzen above Yager Creek could fish sometime late in the weekend reports Grundman. “Below Yager should come around later in the week, but it will probably still be a little high.” Grundman added.

Mad River
According to Justin Kelly of Eureka’s RMI Outdoors, the Mad won’t turn green until probably the middle of next week. It’s still running at over 10-feet with water still coming over the Ruth spillway, so it’s not dropping quickly. It will fish best once it get’s down to 7.5 feet,” Kelly said.

Upper Trinity
The water is a little high and dirty in the Douglas City area reports Steve Huber of Steve Huber’s Guide Service. “The lake is still pushing out muddy water, but it should be a decent color by the weekend. It’s been real quiet since last weekends storm, but that should change this weekend. The Junction City area is looking real good, the waters nice and green. The last big rise should have moved a bunch of fish around, it could be good fishing,” Huber said.