The new 2015 Klamath River regulations were approved on Friday, and a couple of them are likely to cause quite a stir amongst anglers. First the good news; we’re looking at a pretty decent return of adult salmon this year, and that’s reflected in the quota, which is roughly a 250 percent increase from 2014. It’s estimated that roughly 120,000 adult salmon will return this fall, which ranks slightly above the average. The Klamath basin sport quota for adult fall-run Chinook will be 14,133 fish. The daily bag limit will be three fish, no more than two adults (greater than 22 inches) and the possession limit is nine, no more than six adults. The 2015 sport fishing season will run from Aug. 15 to Dec. 31 on the Klamath and Sept. 1 through Dec. 31 on the Trinity.

Once these quotas have been met, no Chinook salmon greater than 22 inches in length may be retained (anglers may still retain a limit of Chinook salmon under 22 inches in length). For more information on bag and possession limits, visit the DFG website at www.wildlife.ca.gov/Regulations. All anglers on the Trinity and Klamath rivers must have Salmon Harvest Cards in their possession when fishing for salmon.

Now the news not everyone wants to hear. The new spit-area restriction limits anglers to “catch and keep” for all legally caught Chinook salmon. What that means is once you’ve kept your two adult Chinooks greater than 22 inches, you must cease fishing in the spit area. You can no longer “catch and release” adults while trying to fill your bag limit with a jack. Anglers can leave the spit area to fill their jack component of their daily bag. The spit area is located within 100 yards of the channel through the sand spit formed at the mouth of the river.

The other change will affect the Blue Creek fishery. The Fish and Game Commission reviewed two proposals for Blue Creek. The first was the CDFW’s, which requested a joint focused study to determine hook and release mortality in the Blue Creek area. The second proposal was from the Yurok Tribe to implement a conservation closure. The Commission selected the Yurok Tribe proposal to close all non-tribal sports fishing in the Blue Creek area from June 15 through Sept. 14 from one half mile below to 500 feet above the confluence of Blue Creek and the Klamath River. From Sept. 15 through Dec. 31 the closure is 500 feet above and below Blue Creek. The Commission adopted the proposal as a conservation measure.

Weekend marine forecast
The wind is predicted to lie down slightly, but the ocean will still be rough through the weekend. Friday’s forecast is calling for winds 10 to 20 knots with NW swells 10 feet at 15 seconds. On Saturday, the wind is forecasted out of the NW 5 to 15 knots. Swells are predicted at 9 feet at 13 seconds. Sunday is looking a little better, with winds coming out of the NW at 5 to 15 knots. Waves will be 6 feet at 10 seconds, coming out of the west. These conditions can and will change. For an up-to-date forecast, visit http://forecast.weather.gov/MapClick.php?lon=-124.39273&lat=40.26662.

Perch’n on the Peninsula results 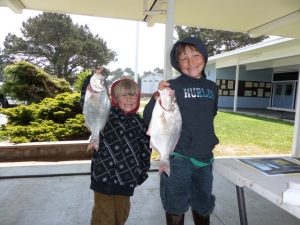 According to even coordinator Charlie Holthaus, 59 participants braved the fog and 8 to 10-foot swells in search of giant perch in this year’s Perch’n on the Peninsula tournament. Below are the results.
In the adult category, Casey Allen landed the largest Redtail, which measured 15.4 inches. There was a tie for the second between Tyronne Bachus and Thomas Jones, each returning with a 15.02-inch perch. By virtue of tiebreaker, Bachus took home second place.
Brothers Sammy (8) and Oliver Luna (5) of McKinleyville took it to the competition this year, taking first and second place in the junior’s category. The brothers fished with their father at Stone Lagoon. Sammy’s perch measured 14.7 inches while Oliver’s came in at 14.3 inches. Abbey Ziesak (12) from Eureka took the third place prize in the junior’s category with her 13.8 inch Redtail Surfperch.

The Ocean:
Shelter Cover Salmon
Strong winds are in the forecast for the next few days, but Captain Jared Morris of C’Mon Sport Fishing Salmon was able to get out last weekend and found the salmon fishing slow, scratching out one or two per trip. The big swell and wind will make the Shelter Cove waters out of commission for the next several days and possibly into next week.

The Beaches:
Even with the less than ideal conditions, the Redtail perch action was decent this past weekend, with quite a few anglers finding success while participating in the Perch’n on the Peninsula derby. Most of the fish were caught early in the morning when the tide was low, as the bite definitely got tougher when the tide started coming in. The clamming wasn’t great over the weekend due to rough seas. From the reports I’ve heard, the clamming was better out into the surf than it was up on the beach.