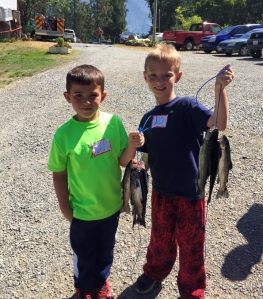 Hope is defined as a feeling of expectation and a desire for a certain thing to happen. I think that pretty much sums up our salmon season so far, don’t ya think? The 2015 ocean salmon season has yet to pan out, but there is still plenty of time left in the season, as well as lots of hope amongst the anglers. The latest bit of news that is sure to keep the fleet going comes to us from Shelter Cove, where reportedly the commercial fleet is into the salmon big time. The sport fleet also put some fish aboard earlier in the week. So I’m expecting those salmon to turn the corner, point their heads north, fulfill our desires and turn our once promising salmon season around. At least that’s the hope…

Fish Lake Kid’s fishing derby happening June 27
The 41st annual Kid’s Fish Lake Fishing Derby is taking place on Saturday, June 27 in Orleans. Registration starts at 7 a.m., the derby starts and 9 a.m. and ends at 12 p.m. It’s open to kids from Pre-K to the 8th grade. Poles and tackle will not be provided and an adult must accompany all children. The Orleans Rod & Gun Club hosts the free event for kids.

Clam tides
The latest round of minus tides will be here through the Sunday and according to Justin Kelly of RMI Outdoors, a few limits were taken at Clam Beach on Monday. “The ocean had been pretty rough, but it looks like it’s calming down and the clam digging should get a lot better over the next few days,” Kelly added.

The Oceans:
Eureka
After sitting on the sidelines since last Thursday due to weather, skippers Tony Sepulveda of Shellback Sport Fishing and Matt Dallam of Northwind Charters were back on the water on Monday. With the weather less than ideal for a Cape run, both spent the day trolling for salmon north of the jaws. According to Sepulveda, who boated two kings, the signs still look good out there, but the fish aren’t here yet in big numbers. “There’s a few here and there, but they aren’t schooled up anywhere. The water temps and color both look good,” said Sepulveda. Dallam had a handful of scratched baits, but didn’t bring anything over the rail. On Tuesday, both skippers ran south to the Cape and fished some pretty tough conditions. They quickly limited out their clients on black rockfish and headed north towards better weather. On the way home, they dropped the salmon gear in fishy looking water, but neither landed a fish.

Trinidad
The fishing report hasn’t changed much the past few weeks according to Curt Wilson of Wind Rose Charters out of Trinidad. “The salmon action has been real slow, though not a lot of effort has been put in lately. Most of the focus has been on the rockfish, which continues to be wide-open. There’s also a good amount of lings around too. Before the last halibut closure, a few were caught despite the rough ocean,” Wilson added.

Crescent City
There doesn’t appear to be many salmon around at the moment reports Leonard Carter of Crescent City’s Englund Marine. “The water has warmed up out front and the bait has disappeared, so conditions are tough. I’ve heard there’s colder water outside and the commercial guys were doing ok fishing real deep. The lingcod bite continues to be off the hook, and the rockfish are biting as well. We’ve got some better weather ahead, so we should see more boats getting back on the water,” Carter added.

Shelter Cove:
Captain Jared Morris of C’Mon Sport Fishing was patient on Tuesday, and they stayed true to salmon trolling for the majority of the day for 5 limits of salmon plus a crew fish with three of the salmon in excess of 20 pounds. He was fishing in the slot between the Old Man and the Hat in rough conditions. They also put in limits of rockfish and lingcod and were pulling crab pots in the late afternoon.

Captain Trent Slate of Shelter Cove Sport Fishing pulled his crab pots in the morning for 60 jumbos before putting in an hour in the same area trolling for salmon. His clients wanted action, so they put in 80 rockfish along with 18 lingcod to 15 pounds. He said, “Rockfishing was particularly good on Monday with some huge vermilion and coppers in the sacks. “ The commercial salmon fleet also did well on Monday for salmon. He added, “It should be really good right now, and I expect the salmon bite to break out since there is so much bait along the coast.”

The Rivers:
Lower Klamath
Spring salmon fishing has slowed down to the point that very few boats have been fishing up river the past couple weeks. The water has warmed up, and the reports I’m hearing are that the fish are moving in and out of mouth, but not heading upriver in big numbers.