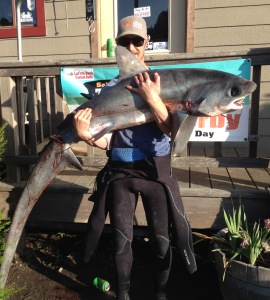 Brett Gregory, owner of Salty’s in Trinidad, had his hands full in landing this 67 lb. Thresher Shark on Sunday while fishing from his Kayak out of Trinidad. The big shark took an hour to land and towed Gregory a mile and a half. Photo courtesy of Salty’s Supply Company

The finish line is in sight for what can best be described as a very strange recreational salmon season on the North Coast. It began back in May with tons of excitement and optimism ­­— ­the prospect of a million salmon swimming in the ocean will do that. The general mantra for ocean salmon fishing has always been – find the birds, find the bait and you’ll find the fish. We had the first two the entire season, along with tons of whales, but the salmon just weren’t there. Needless to say, trips to the Cape for rockfish became a mainstay for charters and sport boats this year. And as it turned out, one of those trips changed the tide of our salmon season. A local sport boat ventured from the pack and found a pretty good salmon bite in the area called the pinnacles. From that day in mid July until today, that’s where the majority of the salmon were caught. The Eel River canyon produced some decent fishing days, but nothing as consistent as the pinnacles. As the season comes to a close on Monday, we should feel fortunate about the season we had. There were plenty of ports to our north and south where very few salmon were caught. As the El Nino takes hold of our coastline and pushes the warm ocean water inshore, let’s hope the albacore show up in big numbers to offset what turned out to be a strange and somewhat disappointing salmon season.

Klamath River quota update
According to Sara Borok, Environmental Scientist on the Klamath River Project, a total of 1,615 adult Chinook have been harvested as of Tuesday. This includes 704 adult salmon that have been harvested at the spit. The lower Klamath quota for 2015 is 7,067 adults and the spit fishery will close after 2,120 have been caught. For more information on the Klamath regulations, visit https://www.wildlife.ca.gov/Regulations

Free Fishing Day on Saturday
This Saturday, September 5 is the second of California’s two 2015 Free Fishing Days, when people can try their hand at fishing without having to buy a sport fishing license. All fishing regulations, such as bag and size limits, gear restrictions, report card requirements, fishing hours and stream closures remain in effect. For more information on Free Fishing Days, please visit www.wildlife.ca.gov/Licensing/Fishing/Free-Fishing-Days

Trinidad Rockfish Wars V to be held Sept. 12
Pacific Outfitters will be hosting the 5th annual Trinidad Rockfish Wars kayak fishing tournament on Saturday, September 12. The tournament is open to Kayak, Canoes and SUP’s. Only 200 spots will be available and registration ends on September 5. This year awards will be given in several categories, including Biggest Fish (in each species), Handline Challenge and Barbie Pole Challenge. For more information and complete details of the tournament, visit trinidadrockfishwars.com.

The Oceans:
Eureka
As has been the case for the last couple months, the majority of the salmon action is still centered near the Pinnacles off Cape Mendocino. Rough seas has kept the charters from making their way south since Sunday, though Tony Sepulveda of Shellback Sport Fishing made the trek on Wednesday. “We fished a couple hours and the salmon didn’t show, so we decided to switch over to rockfish. There’s been less and less bait down there and it looks like it may be breaking up. The fish are likely starting to peel away and head towards the rivers,” Sepulveda added. The action out front and to the north has been hit and miss, with a few fish caught each day by boats fishing right on the beach. Tim Klassen of Reel Steel Sport Fishing took advantage of some decent offshore weather on Sunday and went looking for tuna. They found really good water about 50 southwest of the entrance, but couldn’t get any tuna up to the boat.

Trinidad
There was a decent salmon bite earlier this week, but it has since slowed reports Curt Wilson of Wind Rose Charters. “Most of action was inside Trinidad Bay just south of the whistle buoy in 30 feet of water where the birds and bait have been pretty thick. There have also been lots of Thresher sharks around this week, quite a few have been hooked and couple were landed. The rockfish bite remains steady, but there are days when they don’t come as easily,” Wilson added.

Crescent City
A few salmon were caught out front of the harbor this week according to Leonard Carter of Crescent City’s Englund Marine. He said, “A few boats have been trolling and were able to land a couple. I heard one boat hooked five. It’s a good sign there’s some fish around, but there isn’t much time left in the season. The rockfish bite is still wide-open, though the effort has lessened this past week. Hopefully the ocean will be nice this weekend so the boats can get out.”

The Rivers:
Lower Klamath
Fishing has been pretty tough the last couple days reports Mike Coopman of Mike Coopman’s Guide Service. He said, “Earlier in the week, we were working for our fish, but we usually ended up with limits. I’m seeing quite a fish roll up and down the whole river; I just don’t think they’re stopping. It’s been a few years since we’ve had these steady flows and I think the fish are moving through the system quickly.”