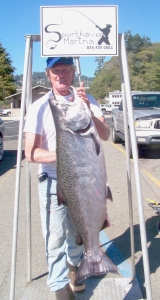 Mark Rowland is currently in first place in the Chetco Bubble season Hawg Derby with this 45-pound salmon. The big king was landed on October 2. First place in the derby, which ends Sunday, is worth $3,000
Photo courtesy of Sporthaven Marina, Brookings

After a typical slow start to the 11-day Chetco Bubble Season, the action has started to get hot the past few days. According to Cindy Jones O’Reilly, owner of Sporthaven Marina, some big fish have been caught recently, with the biggest tipping the scales at a whopping 47-pounds. “For whatever reason, the big ones have been biting later in the morning the last few days.” The current leader in the Chetco Hawg Derby as of Wednesday is a 45-pound king and there’s been a handful of 40’s and 30’s that have also come in. The bubble season will wrap up Sunday, October 11. If you plan on making the trip to Brookings for the weekend, make sure and check the forecast prior to leaving home. The forecast was calling for mixed swells 8 to 10 feet. For more information, visit http://www.dfw.state.or.us/MRP/salmon/Regulations/docs/2015_Chetco_SW_Sport.pdf

Weekend weather/ocean forecast
The storm that was originally in the forecast for this week fell apart due to the ridge of high pressure according to Reginald Kennedy of Eureka’s National Weather Service. “The next few systems will likely push to our north, it looks like we’ll be dry at least through next week,” Kennedy added. As of Wednesday, the forecast doesn’t look promising for weekend offshore adventures. Saturday, south winds are forecasted 5 to 10 knots with waves W 11 feet at 13 seconds. Conditions look similar on Sunday, with south winds to 5 knots and W waves 10 feet at 13 seconds. For up-to-date weather forecasts, visit http://www.weather.gov/eureka/. You can also call the National Weather Service at (707) 443-7062 or the office on Woodley Island at (707) 443-6484.

HSU Fisheries Seminar
Dr. Nate Mantua of NOAA/NMFS Southwest Fisheries Science Center will be holding a seminar on Wednesday, October 14 from 5 to 6 p.m. at HSU. The title of the seminar is “Blame it on the wind ‐ understanding mechanisms of NE Pacific temperature trends and variations since 1900, including the weird warm years of 2014‐15,” and will be held in the Wildlife/Fisheries Building Room 258.

Dungeness crab testing in progress
According to DFG Senior Marine Biologist Pete Kalvass, who oversees the Invertebrate Management Project, samples were collected last week from Crescent City, Trinidad, and Eureka and are awaiting results on the presence of domoic acid. “We plan to collect again during the first week of November for both the condition of the crab as well as domoic acid,” Kalvass added. For more information regarding recreational Dungeness crab fishing regulations and other crab species, visit the DFG Marine Region website at https://www.wildlife.ca.gov/Conservation/Marine/Invertebrates/Crabs

The Oceans:
Eureka
The rockfish bite remains wide-open according to Skipper Tim Klassen of Reel Steel Sport Fishing. “If the weather allows us to make our way to the Cape, we’ve been rewarded with lights-out fishing. On Tuesday, the ocean was flat like a lake and the fish were biting like crazy. It didn’t take long to get limits of everything,” Klassen said.

Crescent City
A few sport guys have been out chasing rockfish, and it sounds like its still wide-open reports Chris Hegne’s of Englund Marine. “We’re not seeing a ton of boats go out, but the ones that are have been finding easy limits of black and lings,” Hegnes added

The Rivers:
Smith River
A few fish are reportedly being caught at the mouth tossing Kastmasters and Cleo’s.

Klamath
Lower Klamath
The mouth has opened back up and fish have been making their way up river reports Mike Coopman of Mike Coopman’s Guide Service. “There’s been new fish around the past few days, but not in any big numbers. The fish we are catching are nice and bright. We’re also seeing some silvers come in, so make sure you know it’s a king before you keep it,” Coopman said.

Upper Klamath
According to reports, a few fish are being caught in the Hornbrook area, but the bulk of the fish have yet to show up. As the numbers of fish continue to move through the lower river, fishing should only get better in the upper area.

Middle Trinity
The salmon action has really slowed down reports Tim Brady of Weaverville’s Trinity Outdoors. He said, “There isn’t much going on salmon-wise right now, and I’m not sure if more are coming or we’re at the end. It never really did take off like we had hoped. The steelhead fishing is a different story; it’s been really good. The bank anglers are doing well tossing roe and nightcrawlers along with spinners and spoons. The drift boats are catching them as well, with plugs being the best option.”