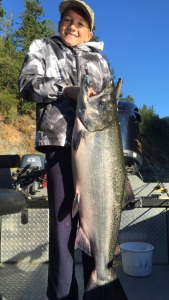 October on the North Coast has always been my favorite time of the year, except when it’s bone-dry. Typically this far into the month, the first rain has hit and we’re deciding which rivers will provide the best opportunity to ambush a big, late fall-run king. While the Klamath and Trinity Rivers have plenty of fish to keep everyone satisfied, what I’m really waiting for is the Smith, Chetco, and Eel to bust open. And that won’t happen until we get a decent amount of rain. Looking at the upcoming forecasts, it doesn’t look as though there’s enough rain to do much of anything, let alone put a rise in the rivers. According to Shawn Palmquist of Eureka’s National Weather Service, about a quarter inch of rain will hit the ground in Del Norte County, and even less in Humboldt. It may be enough to wet the ground, but certainly not enough to see any type of rise in the rivers. In the meantime, we’ll stick with the estuaries where salmon are beginning to mill around. The Klamath is still seeing new fish come in almost daily and the lower Trinity is kicking out a few bright kings. But what I really want is rain, and lots of it. And of course, some very large king salmon.

Klamath River quota update
According to Sara Borok, an Environmental Scientist on the Klamath River, 4,923 of the 7,067 quota of adult salmon have been harvested below the Hwy 96 bridge since August 15. The number of adults left to catch for the quota is 2,144. The lower river and the estuary, except the 100 yards of the channel flowing through the spit at the mouth of the river, remain open to fishing.

Legendary river guide passes
Longtime Klamath resident Gary Farley, 63, passed away Saturday afternoon while guiding on the Klamath River. Farley was fishing with two friends from Ferndale when a boating accident occurred. Farley guided on the Klamath, and surrounding rivers, for more than 30 years, where he earned a reputation as a talented fishing guide and well respected community member. An online fundraiser has been established to help cover burial costs at https://www.gofundme.com/garyfarley. A “celebration of life” will be held on Saturday afternoon at 1 p.m. in Klamath.

Weekend Weather
According to Palmquist, the ridge of high pressure will stick around until Friday when the low pressure will bring in a weak cold front on Saturday. “Rainfall totals won’t be much, maybe a tenth in Humboldt and up to a quarter inch in Del Norte. Showers could linger into Sunday, but once Monday rolls around the high pressure will settle back in and we’ll be dry at least through mid-week,” Palmquist added.

The Oceans:
Eureka/Crescent City
Rough offshore waters brought both ports to a standstill last weekend for sport anglers targeting rockfish. And it’s looking like they won’t get much of a break this weekend, though Friday should be fishable. The forecast for Friday is calling for winds out of the S 5 to 10 knots, with waves NW 2 feet at 3 seconds and W 4 feet at 11 seconds. Saturday and Sunday looks much worse, with winds out of the N 5 to 10 knots and W waves 9 feet at 14 seconds.

Checto anti-snagging bobber rule in effect
From the power line crossing at RM 2.2 upstream to Nook Creek (RM 14) from Sept. 1 through Nov. 3, angling is restricted to fly angling and bobber angling only, with 1 single point hook. Fly angling gear must include a strike indicator. Bobber angling gear must include a bobber and a leader no longer than 36 inches in length. Any weight (except the bobber or strike indicator) may be no more than 36 inches from the hook when suspended vertically. The leader below the bobber or strike indicator must remain suspended in the water column and not resting on the river bottom. The daily/seasonal bag limit is 2 Chinook daily, only one may be unclipped. 20 seasonal, no more than 5 may be unclipped.

Lower Klamath
The mouth of the river is flowing freely and there seems to be quite a few fish around reports Mike Coopman of Mike Coopman’s Guide Service. “The fishing was good last weekend as there were fish throughout the lower river. It seems like we’re seeing pushes of fresh fish come in almost daily now. The river is really low and clear, and you’ll need to take caution if you’re not familiar,” Coopman said.

Upper Klamath
Salmon fishing in the Hornbrook area has been a little on the slow side reports guide Brice Dusi of Brice Dusi’s Guide Service. “The water is really clear, and the fish that are here are spooky. Boats are getting anywhere from 3 to 6 fish per trip, which is pretty slow for this time of the year,” Dusi said.

Smith River
The Smith remains closed above Rowdy Creek, but quite a few fish are being caught below at the Sand Hole according to Leonard Carter of Englund Marine. He said, “Boats trolling anchovies and Kwikfish are doing well at first light, but after that it’s a tidal fishery. Your best bet is to fish the outgoing. A few fish are also being caught at the mouth using Kastmasters and Cleo’s.”

Middle Trinity
Tim Brady of Weaverville’s Trinity Outdoors reports the steelhead and salmon fishing hasn’t changed much from last week. “The bank fishermen are mostly concentrating on the Del Loma and Big Bar area, and I haven’t heard lately how the boats are doing. From what I’m hearing, guys are catching a fish here and there, but not knocking them dead by any means,” Brady added.