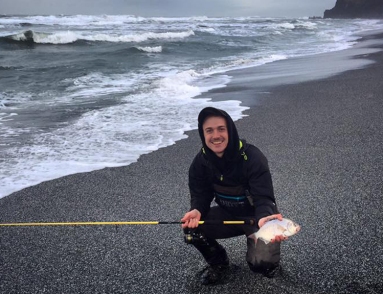 Mad River Tackle & FeelFree Kayaks owner Jens Hansen, along with a few friends, had a banner day catching redtail perch at Stone Lagoon Beach last week. Spring is typically when the redtail action heats up along the North Coast, but they can be caught year-around if the conditions are right. Photo courtesy of Jens Hansen

With the number of adult salmon estimated to be swimming off our coast significantly down from previous years, all signs are pointing towards a much more restricted salmon season in 2016. According to the Pacific Fishery Management Council, 299,600 Sacramento and 142,200 Klamath fall Chinook are said to be swimming in the ocean, which is approximately half of what was projected in previous years. Based on these forecasts, the PFMC this week released three preliminary alternatives for managing salmon fisheries from the Oregon/California border to Horse Mountain (which includes Humboldt County), which represent a fairly drastic change in comparison to previous seasons.

The three alternatives are:

All three alternatives include two salmon per day of any species except Coho, seven days a week, with a 20-inch minimum size. Final recommendations will be made at their next meeting in Vancouver, WA on April 8-14.

The recreational salmon season from Horse Mountain, Humboldt County south to Point Arena will open on Saturday, April 2, with three different season lengths on the table. The first alternative is the season running straight through to Nov. 13. Alternative two has the season running from April 2 through May 31 and June 11 through Nov. 31. Option three is April 2 through May 31 and June 18 through Nov. 13. Fishing will be allowed seven days a week and the daily bag and possession limit is two salmon of any species except Coho. Minimum size limit is 20 inches total length for all three alternatives.

For areas south of Point Arena, the minimum size limit is 24 inches total length. The season south of Horse Mountain will extend through various dates in June, July, Aug, Sept, Oct, or Nov. The alternatives will be finalized at the PFMC meeting on April 8-14 in Vancouver, WA.
For more info, visit http://www.pcouncil.org/wp-content/uploads/2016/03/DRAFT_Council_adopted_Table_2_Rec_Alts_2016.pdf

Small quotas on tap for the Klamath/Trinity fall salmon season

Not only will the ocean anglers feel the pinch of the small salmon populations, the Klamath and Trinity quotas are on the downswing as well. The recreational allocations, or quotas, as proposed by the PFMC will range from 1,111 to 1,181 adult fall Chinook in 2016, which is about an 85 percent reduction compared to last year’s quotas, which were roughly 13,500. With the paltry returns predicted, it’s likely we’ll see a one adult and one jack daily limit.

These numbers are not final, next step is public review with a decision coming from the Fish and Game Commission meeting on April 8-14. Once the quota is agreed upon, 50 percent will go to the lower Klamath basin, 17 percent to the upper basin, and 33 percent will be allocated for the Trinity River. Based loosely on a 1,100 quota, the lower Klamath basin will get 550 adult kings, the upper basin will receive 363 and 187 will be available for the Trinity River. Roughly 165 fall-run kings will be available for harvest at the Klamath River spit. When adopted, these quotas will go into effect August 15, 2016.

Weekend weather
According to Doug Boushey of Eureka’s National Weather Service, we should have decent weather until the next storm arrives on Sunday. “The rain should return sometime Sunday evening and will last into Monday evening, with showers possibly lingering into Tuesday morning. Rainfall totals could amount to one to two inches in Humboldt and Del Norte could see anywhere from three to four inches. Wednesday through next Friday look dry as of now,” added Boushey.

The Rivers:
Chetco River
As of Wednesday, the Chetco was flowing at just over 5,000 cfs and is shaping up nicely for the weekend. There should be a few fresh steelhead around along with some spent fish making their way downriver.

Smith River
Like the Chetco, the Smith should be in prime shape this weekend. Typical of March, expect to see some fresh fish around with plenty of downers to bend the rod.

Eel River (main stem)
Still running at 45,000 cfs as of Wednesday, the main stem is dropping quickly and could possibly fish next weekend barring any rainfall next week.

Eel River (South Fork)
As of Wednesday, flows were still hovering around 10,000 cfs on the Miranda gauge and dropping. If the rain doesn’t fall as forecasted early next week, it could be fishable by late next week.

Van Duzen
Flowing at just above 3,200 cfs on Wednesday, it’s doesn’t look like it will drop down to a fishable shape before the next round of rain rolls in early next week.

Mad River
The Mad is still big and brown, flowing at just over 8,000 cfs on Wednesday. With water coming over the Ruth spillway, it’s likely done for the season.