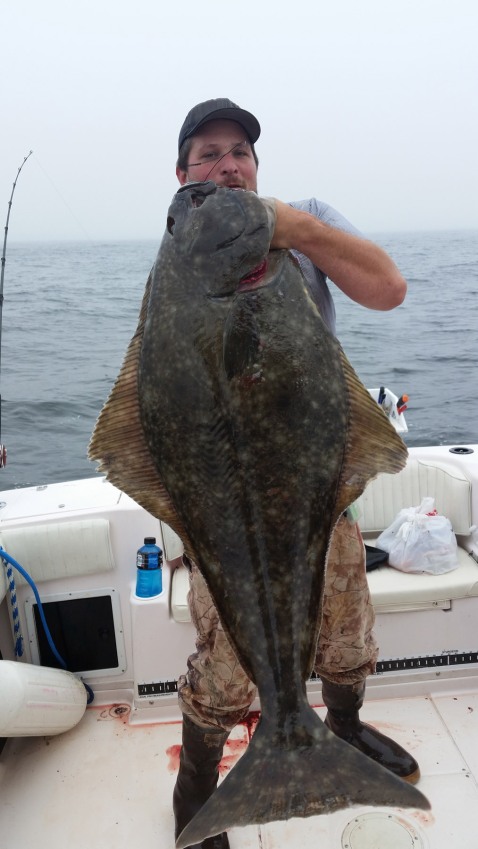 Eureka resident Shane Ranstrom is dwarfed by the 55-lb Pacific halibut he landed last Friday while fishing off the Eel River Canyon. The big fish is currently in second place in the Englund Marine “Big Halibut Contest.” Photo courtesy of Kevin Jameson

It was a pretty tough week for the Eureka sport fishing fleet. The south winds kept most of the boats tied up since the weekend, but they were finally able to get back on the water on Wednesday. The boats that went out ran all the way south to the Cape for rockfish, opting for the sure thing. Last week’s halibut bite never did take off, which took some of the luster off of an all day drift for one or two opportunities. But better days lie ahead. Calm seas are predicted for the next several days, which will make getting to the Cape that much easier. There’s also plenty of good salmon signs around. According to Tim Klassen of Reel Steel Sport Fishing, the area off of Table Bluff looks fantastic with lots of birds, bait and dirty water. Same goes for north around the 51-line. The bay is also stuffed with anchovies, the most Klassen has seen in a few years. While halibut and rockfish make great table fare, king salmon still reigns supreme on the North Coast. June 16 can’t get here quick enough.

Marine Forecast
After a few days of crappy ocean conditions, the wind and seas are forecasted to lie down through the weekend. Friday’s forecast is calling for 5 to 10 knot winds out of the north and swells 5 feet at 11 seconds. Saturday is calling for north winds 5 to 15 knots with 5-foot swells at 13 seconds. Sunday’s forecast is calling for more of the same, north winds 5 to 15 knots with swells 5 feet at 12 seconds. These conditions can and will change by the weekend. For up-to-date weather forecast, visit http://www.weather.gov/eureka/. You can also call the National Weather Service at (707) 443-7062 or the office on Woodley Island at (707) 443-6484.

Youth fishing derby this Saturday
The 9th Annual SkyCrest Lake Youth Fish Derby & Firewise Day will be held this Saturday, June 11. The free event for youths 3 to 15 years old will be held at SkyCrest Lake, Burnt Ranch-Underwood Mtn. Rd. and is hosted by the Willow Creek Fire Safe Council. Registration begins at 8 a.m. and fishing will be from 9 a.m. to Noon. There is a free hot lunch for all from 10 a.m. to 12:30 p.m. Shore fishing only and no pets or alcohol. For more information, call 707-499-0767 or 530-629-2770 or email barbaradarst@yahoo.com. Directions to the event can be found at skycrestlake.com.

Boating safety class coming June 18
The US Coast Guard Auxiliary is offering a one-day “About Boating Safety” class on Saturday, June 18, from 9 a.m. to 3p.m. The class will be held at the Woodley Island Marina conference room and the cost is $20.00 per person. For more information and to pre-register, contact Maggy Herbelin at 707-445-2401.

Pacific Halibut closes after Wednesday
The Pacific halibut season will close again on June 15. The season will open back up on July 1. For information about the seasons and regulations, visit https://www.wildlife.ca.gov/Conservation/Marine/Pacific-Halibut#31670771-pacific-halibut-regulations

Sport salmon opens again Thursday
The second session of the sport salmon season from Horse Mt. north to the CA/OR border will open on Thursday, June 16 and run through June 30. The remainder of the season is as follows: July 16 through August 16, and September 1 through September 5. For more information about the seasons and regulations, visit https://www.wildlife.ca.gov/Fishing/Ocean/Regulations/Salmon

The Oceans:
Eureka
Last week’s halibut action was pretty lackluster at best. According to Klassen, it was zeros, ones and the occasional two for the boats fishing straight out of Eureka. Most of the boats targeted halibut, but a few made their way south to the Cape where the rockfish bite was excellent. Per usual, full limits were easy to come by. Looking ahead to the weekend, rockfish will likely take center stage as the ocean is predicted to be fairly calm.

Crescent City
With salmon season being closed until the 16th, rockfish and halibut have been the main focus for anglers reports Chris Hegnes of Crescent City’s Englund Marine. “A few halibut were caught this week near the south reef. The rockfish bite had been really good, but a huge patch of dirty water moved in which made the bite tough. It’s starting to clear back up, so I’d expect the bite to pick back up. I’ve also heard good reports from the perch fishermen targeting redtails at North Beach,” Hegnes said.

Shelter Cove
Captain Jake Mitchell of Sea Hawk Sport Fishing reports the salmon bite remains slow at the Cove. He said, “The rockfish action has been wide-open, but there aren’t many salmon around at the moment. That could be changing however as we’re starting to see a lot of birds and bait move into the area.”

The Rivers:
Lower Klamath
The spring salmon action has been decent this past week with boats getting a chance at one to two fish per day. Big tidal swings begin this weekend, so hopefully that will push a few more fish in the river. The river is still in great shape with very little, if any, moss moving downstream.