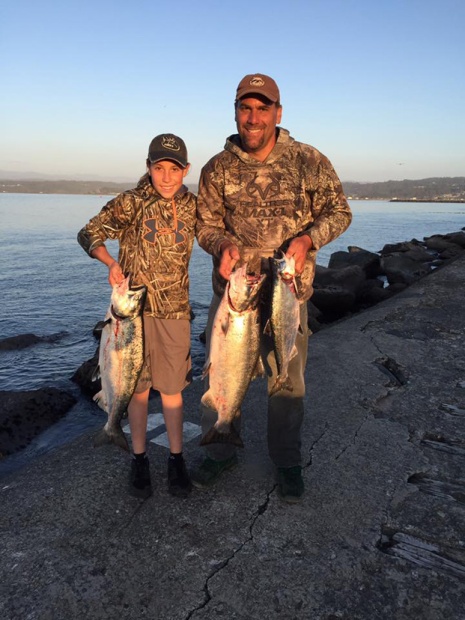 Aaron Pierce and his daughter Ashley hold a couple dandy Chinook salmon caught off the south jetty in Humboldt Bay on Tuesday evening. The Eureka salmon bite was red-hot on Tuesday, with the best bite right outside of the entrance. Kayaks and anglers fishing off the jetties were also catching a few. Photo courtesy of Aaron Pierce/Humboldt Area Saltwater Anglers

Back in 2012, over 380,000 adult fall king salmon were forecasted to return to the Klamath River basin, giving anglers a sport allocation of over 67,000 fish. Both of these numbers were record highs, but boy, where have those good times gone? Riding the heels of a four-year drought and way too many water diversions to mention, the number of salmon predicted to return this fall has dwindled to 30,909, with a sport quota set at a very meager 1,110 for the entire Klamath River basin. The way I look at it, the season can go two ways; if more fish return than predicted, the quotas will be met quickly and we’ll all be fishing for jacks well before Labor Day. If the 30,000 or so adults trickle in throughout the fall, we’ll likely see many days where landing one adult will be considered a good day. Both scenarios aren’t very tantalizing, but it’s the reality of what’s happening on the Klamath and Trinity River basins.

Klamath Quotas
From the 96 bridge at Weitchpec to 3,500 feet downstream of the Iron Gate Dam, 189 adults can be harvested. The take of salmon is prohibited on the Klamath River from Iron Gate Dam downstream to Weitchpec from Jan. 1 through Aug. 14.

The Lower Klamath from the Highway 96 bridge at Weitchpec to the mouth, 555 adults will be allowed for sport harvest. The mouth of the Klamath (spit area) will get 15 percent of the basin quota in 2016, which amounts to 167 adults. This area will be closed to all fishing after the quota has been met.

As a reminder, all legally caught Chinook salmon must be retained while fishing the spit. Once the adult component of the total daily bag limit has been retained, anglers must cease fishing in the spit area.

The main stem downstream of the Highway 299 Bridge at Cedar Flat to the Denny Road Bridge in Hawkins Bar is closed to all fishing September 1 through Dec. 31.

Once these quotas have been met, no Chinook salmon over 22 inches in length may be retained (anglers may still retain a limit of Chinook salmon under 22 inches in length). For more information on bag and possession limits, visit the DFG website at https://www.wildlife.ca.gov/Regulations. All anglers on the Trinity and Klamath rivers must have Salmon Harvest Cards in their possession when fishing for salmon.

The Oceans:
Eureka
After a few days of tougher-than-usual fishing, the salmon went back on the chew “big time” on Tuesday. The best bite remains at the tip of both jetty’s, just outside the entrance according to Tony Sepulveda of Shellback Sport Fishing. “They bit really well on Tuesday, and the fish were big too. All the charter boats had easy limits,” Sepulveda added.

“There’s still quite a bit of bait in the bay, but it isn’t solid out front,” said Tim Klassen of Reel Steel Sport Fishing. “There weren’t many boats out on Tuesday as the forecast was much better than predicted. I’m sure the lack of pressure helped the bite. And it seems like some new fish showed up too. The fish we caught had been feeding on krill, something we haven’t seen in awhile.”

Trinidad
Curt Wilson of Wind Rose Charters reports the super rough water has made the fishing conditions tough for salmon, rockfish and halibut. He said, “The ocean was a little better than forecasted on Tuesday, but I only heard of one salmon caught by the dozen or so boats who were trying. We’ve had to move out to deeper water for rockfish due to the choppy waters, but the blacks are still on the bite. The lings have been a little tougher to come by lately. Not many have tried for halibut since the opener, and I haven’t heard of any being caught as of Tuesday.”

Shelter Cove
The bite has been up and down for salmon in Shelter Cove with Captain Jake Mitchell of Sea Hawk Sport Fishing saying, “This past week we’ve had days where we limited out by 9 a.m. and days without full limits. The commercial salmon season opened on Wednesday and there are quite a few boats in the harbor, so we’ll see what happens with these fish when they get some real pressure on them. Rock fishing was great all last week, but has slowed last couple days.”

Crescent City
The salmon action is still pretty much non-existent reports Leonard Carter of Crescent City’s Englund Marine. He said, “I haven’t heard of any kings caught this week, and the rough ocean isn’t helping. We’ve had a pretty good California halibut bite lately off of South Beach, with a few incidental Thresher Sharks being landed as well. I heard one measured eight-feet. The sloppy ocean has kept the boats from targeting rockfish, but when they’ve been able to get out, it’s been good. The lings bite has been excellent.”

The Rivers:
Lower Klamath
The fall salmon season hasn’t quite kicked into gear on the lower Klamath. Boats trolling the estuary are catching the occasional fish, but big numbers of fish have yet to move in. That could change overnight however. The summer steelhead bite has been slow as well, with only a few hookups per day reported by the few boats who are working the river from Blue Creek down to the Glen.