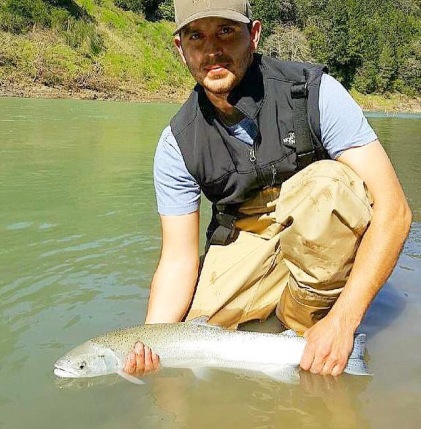 The Pacific Fishery Management Council on Monday provided three options for recreational salmon fishing within the Klamath Management Zone. Unfortunately, all three included the words “closed.” In an unprecedented decision, the PFMC was left with little choice but to close the recreational salmon fishing this season from Humbug Mt. in Oregon south to Horse Mt. near Shelter Cove. The driving force behind the closure is the lack of Klamath River salmon swimming off our coast, which was primarily caused by poor river conditions brought about by years of drought. The California Dept. of Fish and Wildlife forecasted there are only 54,200 Klamath River adult kings in the ocean this year along with roughly 230,700 Sacramento River fish. The Klamath numbers are the lowest on record, and the number of Sac fish is the lowest since 2009. Pretty easy to see whey the council made the decision.

On a positive note, the upcoming rockfish season, which opens May 1, will have a longer season and less depth restrictions allowing boats to fish depths they haven’t touched in 10 years. We also had an additional 5,000 pounds of Pacific halibut added to our annual quota this season, which is expected to also open on May 1. See, the news isn’t all bad…

Shelter Cove/Fort Bragg salmon season to open April 1
The balance of the west coast, from the Mexico border to the Columbia River, will also have very limited ocean salmon opportunities. The Shelter Cove and Fort Bragg area, which runs from Horse Mt. to Point Arena, will open on April 1. Season lengths and end dates are still up for debate. The three alternatives on the table are:

All three alternatives include two salmon per day of any species except Coho, seven days a week, with a 20-inch minimum size. To see all the season proposals, visit pcouncil.org.

All season alternatives will be publicly aired March 27 in Coos Bay and Westport, and March 28 in Fort Bragg. Final season decisions will be made by the council in Sacramento on April 6-12, and submitted to the NMFS for adoption by May 1.

Weekend weather
According to Ryan Alward of Eureka’s National Weather Service, rain is in the forecast off and on for at least the next week. He said, “Following Wednesday’s rain showers, Thursday should be mostly dry with a little sun in the forecast. A 20 percent chance of rain is forecasted for Friday, but Saturday is looking mostly wet. One and a half inches is predicted for the Smith basin and the Eel could see up to an inch. A very slight chance of rain is in the forecast for Sunday, we may see a tenth. The next storm will move in on Monday night and into Tuesday. This will be a much bigger storm with up to two inches predicted.”

Redtails are biting
Right on cue, last weekend’s calm ocean put the redtail perch on the bite. Word has it they’ve been chomping baits at all the local beaches. I’ve been hearing reports of limits coming from the usual spots: Samoa, Centerville, Dry Lagoon, Gold Bluff, and the south spit. Inside Humboldt Bay at the mouth of the Elk River (Stinky Beach) and King Salmon have also been giving up plenty of fish. Redtail Perch have a minimum size limit of 10.5 inches and a daily bag and possession limit of 10.

The Rivers:
Chetco/Elk/Sixes
“The Chetco came back into shape on Monday, and has been fishing well for a mix of bright steelhead and spawned out fish heading back to the ocean,” said Andy Martin of Wild Rivers Fishing. “Just a handful of boats are on the river each day right now, so the fishing is pretty good. There are a lot of downers in the upper section of the river. From Ice Box down to Social Security, there are a few bright fish and more downers. Most boats are getting four to six fish a day right now. It looks like the river will remain in good shape for the next few weeks. The Elk and Sixes are both fishing, and have fresh steelhead and downers. With the Umpqua still a little high, the boat traffic remains heavy for this time of year.”

Smith River
The Smith is still full of fresh steelhead reports guide Mike Coopman. He said, “We’ve been averaging anywhere from three to five fresh steelhead a day this week. The downers have yet to show up in any numbers, it’s been pretty amazing. With the rain on Wednesday, we should get a little bump in the flows but the river should be in great shape by the weekend. Quite a few rivers are fishing right now, so the boat pressure has been pretty light.”

Eel River (main stem)
Still running at 12,000 cfs as of Wednesday, the main stem is dropping and starting to turn olive, but won’t likely be fishable prior to the next round of storms.

Eel River (South Fork)
The Miranda area of the South Fork and above is in perfect shape. Flows were right around 1,700 cfs on the Miranda gauge and dropping slowly. Saturday’s rain could blow if out for a few days, but more rain is in store for early next week. Thursday through Saturday is the time to be there.

Van Duzen
Flowing at just above 1,400 cfs on Wednesday, it’s very close to fishable, if it isn’t there already. It’s predicted to bump up to over 2,000 cfs overnight on Wednesday. Definitely worth taking a look at for Thursday and Friday.

Mad River
The Mad remains off color, flowing at just over 9 feet on Wednesday. With water coming over the Ruth spillway along with the snowmelt, it doesn’t look like it’s going to turn green anytime soon. According to Justin Kelly of Eureka’s RMI Outdoors, the fishing really fell off this week and not many anglers were still trying.