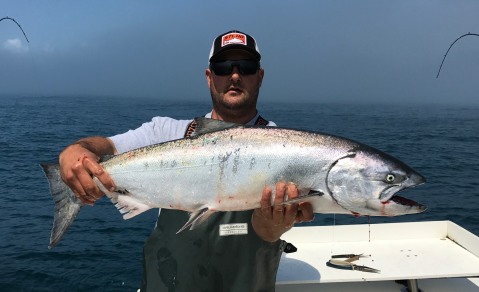 Jesse Mela of Garberville landed a nice early-season Chinook salmon while fishing out of Shelter Cove on Tuesday. The big king weighed 18-pounds, and is one of only a handful of fish that have been caught since the opener on April 1. Photo courtesy of Jesse Mela

The fall-run Chinook fishery on both the Klamath and Trinity rivers will be closed in 2017. The California Fish and Game Commission last Thursday voted to close both rivers to the take of any size Chinook salmon after the fall seasons begin — Aug. 15 on the Klamath and Aug. 31 on the Trinity. Many factors led us to this point, but it’s hard to imagine that just five short years ago the number of fall kings returning to the Klamath basin was well over 300,000. This fall, roughly 12,000 spawners are predicted to come back, an all-time low. To help protect the stocks, ocean salmon fishing will also be closed in the California and Oregon KMZ zones, which run from Humbug Mt. south to Horse Mt.

In the meantime, spring-run regulations are in effect on both rivers. Chinook fishing will be allowed through Aug. 14 on the Klamath downstream of the Highway 96 bridge. On the Trinity, fishing is open downstream of the Old Lewiston Bridge to the confluence of the South Fork Trinity River through August 31. The limit is two kings of any size on both rivers. After these dates, both fisheries will be closed for salmon for the remainder of the calendar year. Important Reminder: During the salmon season closure, steelhead angling will still be allowed in both the Klamath and Trinity rivers.

Weekend marine forecast
The weekend forecast for Shelter Cove doesn’t look to enticing as of Wednesday. On Saturday, winds will be out of the W 10 to 15 knots with W waves 10 feet at 14 seconds. Winds will pick up on Sunday, coming from the NW 10 to 20 knots. Waves will be from the NW 7 feet at 6 seconds and W 9 feet at 13 seconds. Conditions can and will change. For an up-to-date forecast, visit http://marine.weather.gov/MapClick.php?lon=-124.49013&lat=40.37055#.WOLb6eQ2yUk

Tough salmon bite continues at the Cove
Six boats and a handful of kayakers came up empty trying for salmon last weekend at Shelter Cove. It sounded like conditions were good, plenty of bait and birds, but no biters. “A friend of mine went out on Tuesday and got a nice 18 lb. salmon, and had a couple more good take downs,” said Jake Mitchell of Sea Hawk Sport Fishing.

Proposals on the table for Oregon’s ocean bubble fishery
The Oregon Fish and Wildlife Commission will adopt regulations for the ocean sport terminal areas at their April 21 meeting in Klamath Falls. Elk River Ocean Terminal Fishery: The 2017 forecasts for Elk and Sixes River Chinook are expected to be about the same as recent years. In 2016, the sport season was November 1-30 with bag limits of two Chinook per day, but no more than one wild Chinook per day and ten per season. The ODFW is recommending the Commission adopt the same sport season regulations for 2017. Chetco River Ocean Terminal Fishery: The 2017 forecasts for the Chetco and Winchuck River Chinook are reduced from recent years. As a result, ODFW is proposing continuation of a shortened season for the recreational fishery compared to prior years. Proposed seasons for 2017 are: October 7-8   and 14-15, encompassing two weekends. One Chinook per day, minimum size 28 inches.

Increased flows coming down the Trinity
The Trinity River flows will begin to increase on Saturday as releases from Lewiston Dam rise to hit a spring-high flow of 11,000 cfs after a determination that this is an “extremely wet” year for the basin. The flows will peak on Wednesday, April 26 at 11,000 cfs. Residents near or recreating on the river can expect levels to increase and should take appropriate safety precautions. Landowners are advised to clear personal items from the floodplain prior to the releases. A daily schedule of flow releases is available at http://www.trrp.net/restore/flows/current/

The Rivers:
Main Stem Eel
The main stem Eel remains big and off color, and it looks like it may be that way for some time. Wednesday’s rainfall is expected to push flows back up to nearly 25,000 cfs on the Scotia gauge by Thursday evening. It will take a solid 10 days for it to clear; it’s starting to look like that won’t happen this season.

Smith River
“I haven’t been on the water in a while, but I’m hearing a few fish are being caught,” reports guide Mike Coopman. “The fishing pressure is light, which is typical for this time of the year. But there’s still fish around and the few who are out there are catching a few downrunners each day,” Coopman said.

Send in your fish photos
Land a big salmon, trout or perch lately? Or maybe your friend or relative has reeled in their first fish. Email your fishing photo to kenny@fishingthenorthcoast.com and I’ll run them with the “Fishing the North Coast” weekly column and also post them on fishingthenorthcoast.com. Just include the name of the person in the photo, where and when it was taken and any other details you’d like to share.