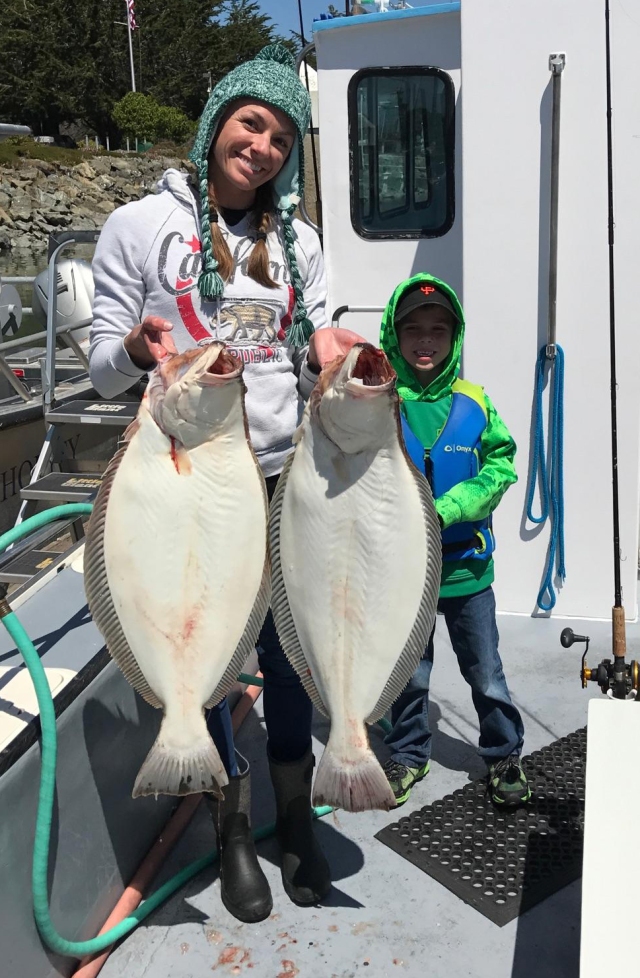 Having a backup plan — whether in life or in fishing — is always a good idea.

In fishing, having a solid plan B can sometimes save the day, or even a season. For Eureka anglers, heading offshore to fish for salmon, halibut or rockfish is always plan A. With no salmon season and lots of wind and rough seas to squash any thoughts of heading out the jaws, we’re pretty darn lucky to have the California halibut fishery within Humboldt Bay as our offshore alternative. It has certainly saved a lot days for the charter fleet, and it’s been blessing for the smaller boats and kayaks that can’t or don’t want to venture offshore. Currently the bay is full of both shaker and keeper-size halibut. According to Fish and Game, they typically migrate into bays and estuaries during warmer water periods associated with El Niño events, which we had in 2015. With the numbers of juvenile halibut in the bay, the fishery should continue to be productive for the next few years.

The preferred angling method is drifting using live anchovies or shiner perch. Artificial lures and drifting or trolling dead bait both work well at times, although not always as effective.

The 22 in. minimum size limit protects immature CA Halibut from fishery take.
No more than one daily bag limit may be taken or possessed by any one person, regardless of whether the fish are fresh, frozen, or otherwise preserved. For more information see: www.wildlife.ca.gov/regions/marine

Best methods for handling short undersize (AKA a ‘shaker’) halibut that don’t need to be measured:

If the Halibut is close to the minimum size and it must be brought onboard to be measured:

What to avoid when handling short Halibut:

Tip: If the Halibut is gut-hooked, cut the leader line and leave the hook. Attempts at hook removal may increase the chance of death. However, if the Halibut is mouth-hooked attempts should be made to remove the hook instead of cutting the line.

Marine Forecast
If the forecast holds, it looks like it may be another windy weekend. Out 10 nautical miles from Pt. St. George to Cape Mendocino, Friday’s forecast is calling for NW winds 5 to 15 knots and NW waves 4 feet at 6 seconds and NW 4 feet at 10. For Saturday, winds will be out of the N 10 to 20 knots and waves N 6 feet at 6 seconds. On Sunday, winds will be out of the NW 10 to 20 knots and waves NW 7 feet at 8 seconds. These conditions can and will change by the weekend. For an up-to-date weather forecast, visit www.weather.gov/eureka/. To monitor the latest Humboldt bar conditions, visit www.wrh.noaa.gov/eka/swan, or you can also verify the conditions as reported by looking at the bar cam at www.wrh.noaa.gov/eka/barCam/?cam=humboldtBayBar. You can also call the National Weather Service at 707-443-7062 or the office on Woodley Island at 707-443-6484.

Pacific Halibut closes after Saturday
The Pacific halibut season will close on July 15 and open back up on August 1 and run through the 15th. The remainder of the seasons open dates are: Sept. 1-Oct. 31, or until the quota is reached, whichever is earlier. As if July 9, the CDFW has projected 11,190 net pounds have been harvested towards a quota of 34,580 pounds. For up-to-date harvest tracking information, visit https://www.wildlife.ca.gov/Conservation/Marine/Pacific-Halibut#31670772-in-season-tracking

The Oceans:
Eureka
“Not much has been happening offshore as there doesn’t appear to be an end to the wind,” said Skipper Tim Klassen of Reel Steel Sport Fishing. “Late last week and over the weekend the Pacific halibut bite was excellent, with lots of limits reported. We haven’t been able to get back out there since Saturday, and the long range forecast doesn’t look to promising. I’ve heard the tuna water is about 24 miles off of Eureka, but it doesn’t look like we’ll get a shot at it until maybe late next week. Hopefully it will still be in range once the wind stops.”

Trinidad
According to Curt Wilson of Wind Rose Charters, the halibut bite was wide-open earlier this week. “It was fairly easy limits for boats fishing 40 fathoms straight out of the harbor last week and over the weekend. There wasn’t much current, and there seems to be a lot of fish out there. The rockfish continue to bite when the ocean conditions are good. It looks like we won’t be going offshore for halibut this weekend due to the wind, but we may be able to sneak in a rockfish trip,” Wilson added.

Shelter Cove
“Despite the wind, the rock fishing has been great the past couple weeks,” said Captain Jake Mitchell of Sea Hawk Sport Fishing. “We’ve been getting limits just about every trip, mainly fishing the Old Man and the Hat. The weather has kept us off the halibut grounds for the most part, but we have been getting a couple while rock fishing. Some boats ran for tuna last week and they all got pretty good scores. Also, the salmon have shown up and we’ve hooked and released a couple this week on shrimp flies.” The recreation salmon season will re-open in the Shelter Cove/Fort Bragg area on Aug. 15 and remain open through Nov. 12.

Crescent City
Ocean conditions have been pretty sloppy since the weekend reports Chris Hegnes of Crescent City’s Englund Marine. “We had a decent halibut bite last week, including one that came in around 105 pounds. Most of the halibut success has been outside of the South Reef in 300 feet of water. The lingcod and rockfish bite has been good when the boats are able to get out and the current is good.” Hegnes said.

The Rivers:
Lower Klamath
The handful of boats still sitting on the anchor are catching a few spring salmon each day, but the scores haven’t been great. A couple fish have been caught in the estuary by boats trolling Kastmasters and that fishery should heat up any time. There’s a few more steelhead around now, flows are low enough to start side-drifting some of the riffles.