With the warm water still within reach and a flat ocean forecasted for Wednesday, that’s all it took to spark the interest of some late-season tuna die-hards. Or at least one die-hard. Tim Klassen of Reel Steel Sport Fishing and a crew of anglers took a gamble and ran to the patch of water that’s held fish for a while now, roughly 50 miles northwest from the Humboldt Bay entrance. And the gamble paid off handsomely. I didn’t get the exact numbers, but they landed close to 25 and left the fish biting. According to Klassen, there were lots of jumpers and they even hooked a Blue Fin. Thursday’s ocean forecast looks even better, and when Klassen’s report hit the marina, you can bet they’ll be a fleet of boats chasing tuna come Thursday.

Salmon numbers at Willow Creek weir encouraging
According to Mary Claire Kier, an Environmental Scientist on the Trinity River who manages the Willow Creek weir, a high number of jacks continue to make their way through the Trinity. For the trapping week of Sept. 17 through 23, 146  jacks were trapped at the weir. To date, 335 jacks have been trapped compared to 76 for the entire 2016 trapping season. A fair number of fall-run adult kings are also showing up. This past week, 188 kings were trapped, bringing the season total to 317. In 2016, 383 were trapped.

The Oceans:
Eureka
With no salmon and halibut done for the year, it’s been a little quiet according to Tim Klassen of Reel Steel Sport Fishing.  “We ran to the Cape on Sunday in pretty rough conditions and still landed a decent amount of fish. The water was really sloppy, but we almost got limits of rockfish and everyone got at least on ling before we headed back after only an hour and a half of fishing. Humboldt Bay has really been the only option due to weather. And I think that’s beginning to slow down. There’s still a lot of fish around, but it seems there’s fewer keepers around now,” Klassen added. 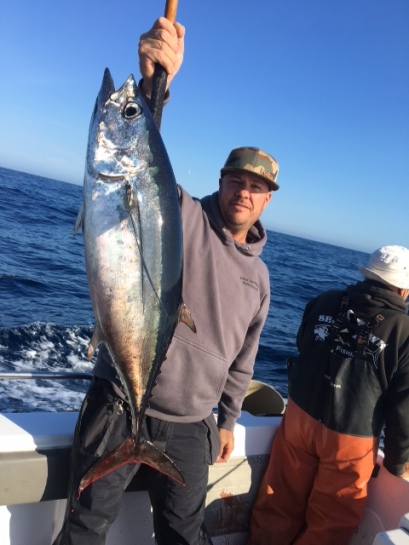 Patrick Warner of Laytonville with a nice tuna caught on Wednesday with Jake Mitchell of Sea Hawk Sport Fishing.

Shelter Cove
“It was my day in the barrel,” said Captain Jake Mitchell of Sea Hawk Sport Fishing. “We had great conditions for tuna on Wednesday, including 63-degree water and we just could not get them to bite. We ended up with eight, but the grade was really good. Our biggest was about 35 pounds. We ended up 35 miles out at the Vizcaino Canyon.”

Crescent City
Not much happening out of Crescent City, with most of the effort coming from a few of the locals reports Chris Hegne’s of Englund Marine. “From what I’m hearing, the rockfish bite hasn’t changed much, when the weather cooperates, the fishing is really good,” Hegnes added.

Low Flow River Closures begin Oct. 1
North Coast rivers regulated by low flow closures, including the Eel River, Mad River, Mattole River, Redwood Creek, Smith River and Van Duzen River will begin angling restrictions on October 1, except for the Mad River, which went into effect September 1.
The Department of Fish and Game will make the information available to the public by a telephone recorded message updated, as necessary, no later than 1 p.m. each Monday, Wednesday and Friday as to whether any stream will be open or closed to fishing. The rivers can be opened up at any time. The low flow closure hotline for North Coast rivers is (707) 822-3164. NOTE: The main stem Eel from the South Fork to Cape Horn Dam and the Mattole River will be closed until January 1, 2018. For more information, visit http://www.eregulations.com/california/fishing/freshwater/low-flow-restrictions/

The main stem Eel River from the paved junction of Fulmor Road with the Eel River to the South Fork Eel River. Minimum flow: 350 cfs at the gauging station near Scotia.

Mattole River: The main stem of the Mattole River from the mouth to Honeydew Creek.
Minimum flow: 320 cfs at the gauging station at Petrolia.

Redwood Creek: The main stem of Redwood Creek from the mouth to its confluence with Bond Creek. Minimum flow: 300 cfs at the gauging station near the Highway 101 bridge.

The Rivers:
Lower Klamath
The steelhead bite on the Klamath has slowed down this week as the fish are really starting to spread out. If you happen to find a school, you can make a good day of it. According to reports there’s a pretty good mix of both half-pounders and adults in the river. The fly fishermen have been catching a few, as well as the boats side-drifting the riffles.

Trinity
There hasn’t been much angling effort this past week reports Tim Brady of Weaverville’s Trinity Outdoors. He said, “Without a salmon season, a lot of anglers won’t be coming to the Trinity this year. And the guys who fish steelhead haven’t shown up yet. We’re still dealing with lots of traffic issues. The river is in great shape, and I’m hearing a few steelhead are being caught by a few anglers. Almost all of the fishing is taking place between Lewiston and Junction City right now.”