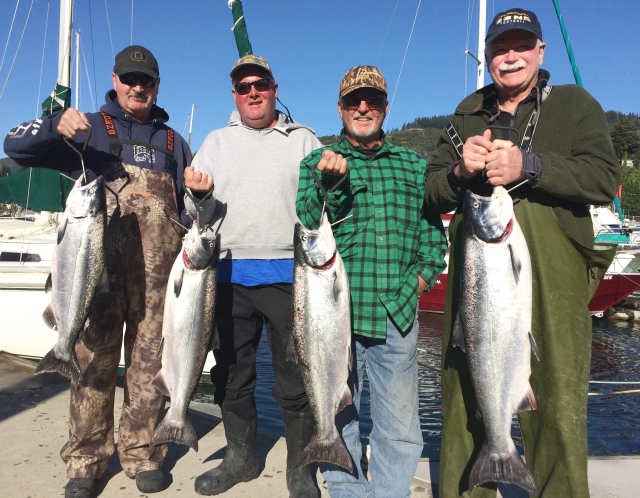 After a slow start to the Chetco bubble season on Saturday, the bite really picked up on Sunday. According to guide Andy Martin of Wild Rivers Fishing, the ODFW fish checkers reported 40 kings for 250 boats on Saturday. “We landed three kings on Saturday, but only one was over the minimum keeper size of 28 inches. On Sunday, we limited out with four kings and lost another four. Most of the other guide boats also limited out. Plug-cut herring was the bait of choice over whole anchovies. The best bite was out in 50-feet of water near the red buoy, where trolling with 12 ounces of lead out 30 feet on the linecounters did the trick.” Martin added. The bubble season will wrap up this Sunday, Oct. 15. According to Martin, the second weekend of the bubble season usually produces more fish — and bigger fish. The daily bag limit is one (1) Chinook per angler. If you plan on making the trip to Brookings for the weekend, make sure and check the forecast prior to leaving home. Saturday’s forecast is calling for a mixed swell to 7 to 8 feet and 2-foot wind waves. Sunday looks better, with a mixed swell to 6 feet and 1 to 2-foot wind waves. For a complete list of regulations, visit http://www.dfw.state.or.us/MRP/salmon/Regulations/docs/2017_Chetco_State_Waters.pdf

Marine forecast
As of Wednesday, the marine forecast doesn’t look great for the weekend. Saturday, north winds are forecasted 10 to 20 knots with waves NW 7 feet at 10 seconds. Winds will decrease slightly on Sunday, with north winds 10 to 15 knots and NW waves 7 feet at 10 seconds. These conditions can and will change by the weekend. For an up-to-date weather forecast, visit www.weather.gov/eureka/. To monitor the latest Humboldt bar conditions, visit www.wrh.noaa.gov/eka/swan, or you can also verify the conditions as reported by looking at the bar cam at www.wrh.noaa.gov/eka/barCam/?cam=humboldtBayBar. You can also call the National Weather Service at 707-443-7062 or the office on Woodley Island at 707-443-6484.

Potential storm brewing next week
The first significant cold front of the season is forecasted to hit Del Norte and Humboldt sometime mid next week bringing with it some potential rainfall according to Brad Charboneau of Eureka’s National Weather Service. “It’s still a little ways off, but the models are showing rain beginning possibly Wednesday evening and lasting into Thursday. It’s hard to predict this far out, but right now models are showing two to four inches of rain potentially for the Smith basin and one to three inches in Humboldt,” Charboneau added.

Recreational groundfish regulations changes effective Oct. 16
The California Department of Fish and Wildlife announced new restrictions on recreational fishing for groundfish in waters north of Point Conception to the Oregon/California border in a press release issued on Oct. 5. Changes to authorized fishing depths described below take effect Monday, Oct. 16 at 12:01 a.m., and will remain in place through the remainder of 2017.

The recreational groundfish fishery depth restrictions will be as follows: for the Northern Management Area, which runs from the Oregon/CA border to Cape Mendocino.

Take is prohibited seaward of 20 fathoms (120 feet) in depth. The ‘all-depth’ groundfish fishery slated for November and December 2017 in this area is canceled. For a complete list of areas of depth restrictions, visit https://cdfgnews.wordpress.com/2017/10/05/changes-to-recreational-groundfish-regulations-effective-oct-16/

Dungeness crab testing in progress
According to Christy Juhasz, an Environmental Scientist with CDFW, “The recent Domoic Acid test results indicate that we may not have any delays this season, but we are still waiting on northern port results which could come in late this week or early next week. We also plan on conducting preseason testing for the north coast at the end of Oct. or early Nov. Depending on these results we will learn more about whether any delays will happen.” Juhasz added. Since July 1, areas within Bodega Bay and Half Moon/SF have been tested, with zero percent of the samples exceeding action levels. For more information regarding recreational Dungeness crab fishing regulations and other crab species, visit the DFG Marine Region website at https://www.wildlife.ca.gov/Conservation/Marine/Invertebrates/Crabs

Trinity flows dropping
Flows coming out of Lewiston Dam will be reduced beginning Saturday, going from 450 cfs down to 300 cfs by Monday.

Willow Creek weir trappings
“We trapped more Chinook than steelhead at Willow Creek weir this past week, but the steelhead are real beauties,” said Mary Claire Kier, an Environmental Scientist on the Trinity “We also picked up another pink (humpy) salmon. The Coho we are seeing are still both small in number and size.” For the trapping week of Oct 1 through Oct. 7, 107 Chinook jacks were trapped at the weir. To date, 779 jacks have been trapped compared to 69 for the entire 2016 trapping season. This past week, 165 adult Chinook were trapped, bringing the season total to 777. In 2016, only 459 total Chinook were trapped.

The Oceans:
Eureka
The ocean’s been rough, right now there isn’t much going on reports Skipper Tim Klassen of Reel Steel Sport Fishing. “The last day we were able to get out was Friday, and that turned out to be a tough day. The fish were really off the bite, likely due to the big groundswells. Looking at the forecast, we may be able to get out on Sunday, but that looks iffy,” Klassen said.

The Rivers:
Chetco
According to Martin, there’s quite a few jacks and about four dozen adult salmon at Social Security Bar now. He said, “Those were likely the fish that were holding in the estuary last week. Fishing was good in the estuary along the jetties early last week prior to the weekend ocean opener.”

Smith River
A few fish are reportedly being caught at the mouth tossing Kastmasters and Cleo’s. If the rain comes as predicted next week, we should see a decent push of fish enter the lower river. The river is currently closed to fishing above the mouth of Rowdy Creek.