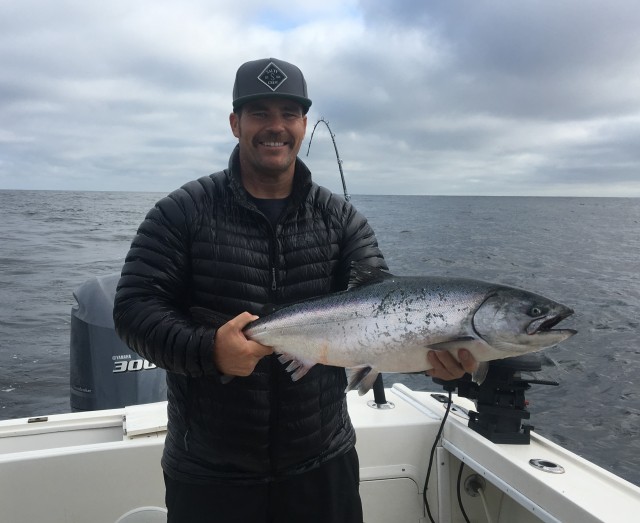 Petaluma resident Manny Medeiros landed a nice size king salmon while fishing north of Eureka on Monday. Salmon season is off to a good start out of both Eureka and Trinidad, with lots of kings being caught daily. Photo courtesy of Marc Schmidt/Coastline Charters

One thing we know for sure after the first week of salmon season on the North Coast – the future looks very bright. According to reports, there is no shortage of small kings from Shelter Cove all the way to Crescent City. Boats fishing out of Eureka and Trinidad have been weeding through the undersized fish and filling their boxes with kings ranging in sizes from 20 to 26-inches, with the occasional 7-8-pounder in the mix. Trinidad has been the spot for bigger fish the past couple days, with sport and charter boats scoring easy limits of kings ranging from barely legal up to 10-pounds. According to Curt Wilson of Wind Rose Charters, there are fish in every direction between 200 and 300 feet of water. The CDFW predicted roughly 360,000 Klamath River adult kings would be swimming off our coast this summer, and that may very well be true. But what’s really cool to see are the new crop of two-year-old’s that are scattered the length of the coast. After a few down years, the ocean salmon population is finally headed in the right direction on the North Coast.

The ocean looks to be fishable through the weekend, at least for those trolling for salmon. On Friday, winds will be out of the E up to 5 knots with W waves 5 feet at 12 seconds. Saturday’s forecast is calling for NW winds 5 to 10 knots and NW swells to 4 feet at 5 seconds and W 6 feet at 12 seconds. Sunday’s prediction is N winds 5 to 10 knots and swells 2 feet at 5 seconds and W 6 feet at 11 seconds. These conditions can and will change by the weekend. For up-to-date weather forecast, visit www.weather.gov/eureka/. You can also call the National Weather Service at (707) 443-7062 or the office on Woodley Island at (707) 443-6484. To monitor the latest Humboldt bar conditions, visit www.wrh.noaa.gov/eka/swan

The first of four sport Pacific halibut seasons off of California will come to a close after next Friday, June 15. Through May 27, the CDFW has projected 4,891 net pounds of the 30,940-pound quota of Pacific Halibut has been harvested. This season’s open dates are May 1-June 15, July 1-15, Aug. 1-15 and Sept. 1-Oct. 31, or until the quota is reached, whichever is earlier. To view the latest catch projection information, visit https://www.wildlife.ca.gov/Conservation/Marine/Pacific-Halibut#31670772-in-season-tracking

Eureka’s Sportsman’s Warehouse will be holding a free class on “Baitfish Catching Techniques” on Friday June 8 from 5 p.m.to 6 p.m. The class will teach you how to catch your own bait for local fish. They will be going over everything from harvesting sand crabs to anchovies for the best plan for catching the big ones. Sportsman’s Warehouse is located at 3456 Broadway in Eureka.

The first two days of the salmon season were really good right out front reports Tim Klassen of Reel Steel Sport Fishing. “There were lots of fish around, though mostly small, but most everyone had limits of fish ranging from 20 to 26-inches,” said Klassen. “By Sunday, the conditions really changed and the dirty water, bait, and birds all but disappeared. The ocean was pretty rough, and not very many boats limited out.” Following some reports of a better grade of fish near Trinidad, most of the fleet headed north on Tuesday. “We made it about six miles shy of the head as we were hearing it wasn’t red-hot up there. We stopped and ended up fishing between the 48 and 52-lines in 250 feet of water where a north to south running current rip was holding bait fish – as well as salmon. We worked that area for most of the day and ended just shy of limits. Overall, there seems to be fish as far as the eye can see. There’s tons of shakers, and I don’t think the bigger three-year-old’s have shown up yet. It’s looking like it’s going to be a good season.”

Curt Wilson of Wind Rose Charters called in a wide-open salmon bite report on Wednesday morning. “The salmon bite is red-hot today,” Wilson said. “The fish are off Patrick’s Point in roughly 240 feet of water. The fish are a little better grade today, with most running 7 to 12-pounds.” Wilson also added a 40-pounder was weighed in at the Trinidad pier on Tuesday, so there are some bigger fish around.

The big news coming out of the Cove this week was Jared Morris of C’mon Sportfishing landing the season’s first salmon caught above the 40’05 line out of Shelter Cove. His crew put five kings in the box on Saturday in windy conditions. The fish were a decent grade, all running 7 to 8-pounds. According to Jake Mitchell of Sea Hawk Sport Fishing, the wind has really been blowing at the Cove. He said, “I fished on Monday with three clients and it was very sloppy. We managed to get limits of rockfish and lingcod before it got unbearable. We also lost a nice halibut at the boat. Looks like the wind might let up a little at the end of the week so we should be able to get back out.”

There were a few salmon caught this past weekend reports Leonard Carter of Crescent City’s Englund Marine. “Most of the sport and commercial fleet have been fishing 10 to 12 miles straight out on a 180 to 210 heading. I’m hearing a few being caught, but it’s not been red-hot. Like everywhere else, there’s lots of shakers around. The keepers are averaging 10 to 12-punds. The rockfish bite has been good overall, but the last couple days we’ve had some real heavy current which made the bite tough.” Carter said.

Salmon fishing continues to be hit and miss out of Brookings reports Andy Martin of Brookings Fishing Charters. He said, “After a couple dozen fish are caught one day, only a handful are caught the next. Most of the fish are still six to 10 miles offshore along the California border. The bait has moved in close, but the salmon are still offshore. The water temperature is 48 to 49 degrees, which may be affecting the bite. Lingcod and rockfish action has been good, but the incoming tide is fishing much better than the outgoing. Red-tail surfperch are just beginning to spawn, so the action is really good at Crissy Field right next to the state line.”