The warm tuna water came within reach of the two ports to our south – Shelter Cove and Fort Bragg – and anglers jumped at the chance to put the season’s first albies on board. Captain Jake Mitchell of Sea Hawk Sport Fishing out of Shelter Cove targeted tuna on Sunday and Monday and did well both days. “We ran towards Vizcaino Canyon and Vizcaino Knoll and found the break at 24 miles on Sunday,” said Mitchell. “It was a pretty slow pick most of the day, but we ended up with 15 nice tuna to 30-pounds. On Monday, the warm water had pushed out some and it took me a while to get it figured out and find where the fish were. Once we did, they started coming over the rail pretty quickly. We ended up with 25 fish that were mostly peanuts and some up to 15-pounds.”

The weather and water was equally as good out of Fort Bragg on Friday and Saturday. Quite a few boats made the 30-plus mile run northwest out of the jaws and it was game on almost immediately. From all of the reports, every boat out landed double digits, with the top boat landing 41. The seas roughed up by Sunday, but that patch of warm water is still sitting in between the Cove and Fort Bragg. The forecast doesn’t look great through the weekend, but the tuna hunters have their sights set on Monday.

The ocean doesn’t look good for the next few days, but conditions will begin to settle late in the weekend. Friday’s forecast is calling for 10 to 20 knot winds out of the N and NW waves 9 feet at 9 seconds. Saturday is calling for N winds 10 to 15 knots and waves out of the NW 7 feet at 9 seconds and SW 2 feet at 19 seconds. Sunday’s forecast is a little better, with winds out of the NW 10 to 15 knots and waves NW 6 feet at 8 seconds and SW 2 feet at 18 seconds. These conditions can and will change by the weekend. For an up-to-date weather forecast, visit www.weather.gov/eureka/. To monitor the latest Humboldt bar conditions, visit www.wrh.noaa.gov/eka/swan. You can also call the National Weather Service at 707-443-7062 or the office on Woodley Island at 707-443-6484. 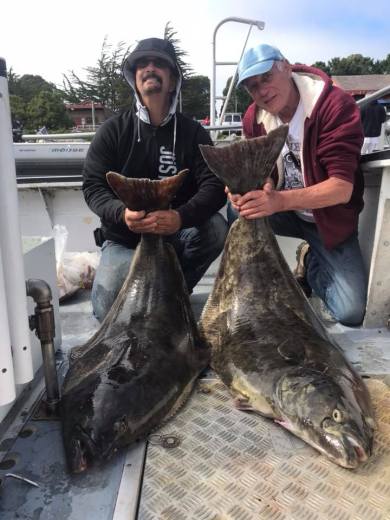 But now that halibut is closed until August and the weather is a little too rough for a Cape run, chasing salmon has moved up the ladder as far as options go. Sepulveda spent a couple hours trolling out front in 170 feet of water on Monday, and put four keepers in the box. “I went looking down near the canyon, but I didn’t see any good sign,” said Sepulveda. “We headed back up the hill and dropped the lines in and landed a 17-pounder right away. We picked up three more keepers before heading into the bay to try for halibut. We haven’t spent much time fishing for salmon, it doesn’t seem like there’s any big schools out there. June typically sets the tone for our season, and they just weren’t here in big numbers,” Sepulveda added. The California halibut bite has been good, but not red hot. “We had some really big tide swings, which makes fishing tough,” said Tim Klassen of Reel Steel Sport Fishing. “They’re much better beginning Thursday, with small tidal exchanges. There hasn’t been fish everywhere, but lots of small schools. And there’s lots of undersized halibut around too. There’s a fair amount of bait in the bay, so it should be good fishing this weekend,” Klassen added. The daily bag limit is three, and the minimum length is 22 inches.

According to Curt Wilson of Wind Rose Charters, there’s been a steady pick of salmon since last week. He said, “The best bite has been in 60 to 100 feet of water in both directions. There’s been quite a bit of squid around, and small schools of salmon. If you find one, you can do pretty well. The weather has been real windy and a little rough on the outside, so we’re having a hard time putting in full rockfish trips. If you put your time in, there’s limits to be had. There’s lots of blues and blacks around, and we’re catching a few lings as well. The crabbing is still going strong, we’ve been sending the customers home with limits of nice big males,” Wilson added.

Along with a really good tuna bite, the rockfish action is staying hot as well. Mitchell spent most of last week fishing at Rogers Break, scoring limits each day. There hasn’t been much in the way of keeper kings, so he ran down the coast towards Westport on Tuesday and boated eight quality kings up to 22-pounds.

A few salmon have been caught this past week reports Leonard Carter of Crescent City’s Englund Marine. “I’ve heard of some being caught out near the South Reef and also north a mile off of Castle Rock. There’s been lots of little keepers, and I also heard a 20-pounder was caught this week. The bottom fishing has been good when the boats have been out. Most of the guys are getting full limits, including lings,” Carter added.

Windy weather has again stalled salmon fishing in the ocean out of Brookings reports Andy Martin of Brookings Fishing Charters. He said, “A few fish a day are being caught near the buoys, but most of the fish appear to be offshore, where conditions have not been favorable. A few California halibut were caught last week by anglers trolling close to shore.”

The salmon action in the estuary is still going strong, with quite a few fresh salmon being caught daily. There’s been a decent bite first thing in the morning, then it becomes a tidal bite. With all the moss in the river, the incoming tide has been the best. Typically the outgoing tide fishes better, but this year with all the moss in the river, the fish seem to be coming in better on the high tide. During the incoming high, there’s a lot less moss, which gives us about a two-hour window of moss-free fishing. Trolling anchovies behind a Rogue River spinner bait is catching the majority of the fish, but a few are being caught on Kastmasters and spinners.