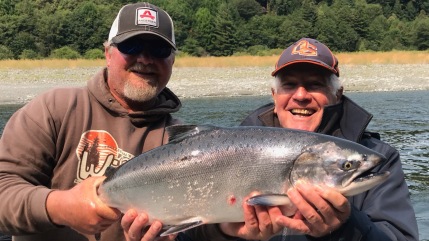 The salmon rebuilding process is in full swing on the Klamath and Trinity Rivers. Following last year’s complete ocean and fall salmon river closures, we didn’t have anywhere to go but up. And that looks like exactly where we’re headed. The CDFW has forecasted roughly 93,500 adult fall-run kings will return to the Klamath basin this year, which is a big leap from last year’s 31,838 returnees. The rebuilding process was boosted by the 21,903 jacks (two-year old salmon) that also made their way upriver in 2017. If the number of adult kings that were swimming in the estuary the last couple months is any indication, 2018 is shaping up to be a really good season. And with all the shakers being caught in the ocean, the future is looking equally as bright.

From the 96 bridge at Weitchpec to 3,500 feet downstream of the Iron Gate Dam, 593 adults will be allowed for sport harvest. The take of salmon is prohibited on the Klamath River from Iron Gate Dam downstream to Weitchpec from Jan. 1 through Aug. 14.

The Lower Klamath from the Highway 96 bridge at Weitchpec to the mouth, 1,745 adults will be allowed for sport harvest.

The Spit Area (within 100 yards of the channel through the sand spit formed at the Klamath River mouth) will close when 15 percent of the total Klamath River Basin quota is taken downstream of the Highway 101 bridge. In 2018, 523 adults can be harvested below the 101 bridge. Only the spit area will close to fishing once this quota is met, fishing will remain open upriver of the spit.

As a reminder, all legally caught Chinook salmon must be retained while fishing the spit. Once the adult component of the total daily bag limit has been retained, anglers must cease fishing in the spit area. Also, the new six-foot leader length restriction went into effect on March 1.

The main stem downstream of the Highway 299 Bridge at Cedar Flat to the Denny Road Bridge in Hawkins Bar is closed to all fishing September 1 through Dec. 31.

Once these quotas have been met, no Chinook salmon greater than 22 inches in length may be retained (anglers may still retain a limit of Chinook salmon under 22 inches in length). The 2018 sport seasons, dates, locations and bag limits are published in the 2018-2019 Sport Fishing Regulations Supplement, which can be found at http://www.eregulations.com/california/fishing/supplement/klamath-river-basin-regulations/. Additional season information is available on the Klamath-Trinity River hotline at 800-564-6479. All anglers on the Trinity and Klamath rivers must have Salmon Harvest Cards in their possession when fishing for salmon.

The ocean looks good through Friday, but will begin to get a little rough by the weekend. Out 10 nautical miles north of the Cape, Friday’s forecast is calling for NW winds 5 to 10 knots and waves out of the NW 2 feet at 4 seconds and W 2 feet at 11 seconds. Saturday is calling for N winds 10 to 20 knots and waves NW 6 feet at 7 seconds. Sunday’s forecast is call for winds out of the N 5 to 15 knots and waves NW 7 feet at 8 seconds. For an up-to-date weather forecast, visit www.weather.gov/eureka/.  To monitor the latest Humboldt bar conditions, visit www.wrh.noaa.gov/eka/swan. You can also call the National Weather Service at 707-443-7062 or the office on Woodley Island at 707-443-6484.

The Eureka fleet has plenty of options, and right now they’re all producing. The salmon bite is good, and it seems to be getting better according to Tim Klassen of Reel Steel Sport Fishing. “There seems to be more fish around now and they’re in a pretty big area. Fish are being caught from the 46 all the way to the 50 line in 180 to 200 feet of water,” said Klassen. “They’re mostly coming deep, though we did catch a few shallow on Tuesday.

The warm tuna water came close and the weather cooperated enough for Klassen to run for Tuna on Sunday. “The water was about 50 miles southwest of the entrance, straight off the Cape. In about four hours of fishing, we landed 22, with the biggest in the 30-pound range. They averaged a solid 12 to 13 pounds,” added Klassen. The Cape is still providing some excellent rock fishing, “The ling cod are biting like piranhas,” said Tony Sepulveda of Shellback Sport Fishing. “The rock fishing remains excellent, we’re catching some big vermilions, coppers and quillbacks. We also caught a couple nice Pacific halibut on the opener, with the biggest weighing 68-pounds.” California halibut remains a solid choice as well, with limits still being taken. “There’s quite a bit of bait in the bay right now, and that’s where you’ll find the halibut,” said Sepulveda.

Curt Wilson of Wind Rose Charters reports the salmon bite has been really good all week. He said, “They bit all week, but it dried up on Tuesday for whatever reason. But that didn’t last long as we went right back on Wednesday and caught 5, and could have had limits. There’s salmon in both directions from south of the Mad River to Patrick’s Point. We’ve been fishing in 200 feet of water and most of the time they’re right on the bottom. A few have been coming on deep-sixes as well.”

The salmon bite picked back up last week, but has really died off again the last couple days reports Jake Mitchell of Sea Hawk Sport Fishing. “We had limits Wednesday through Saturday right at the whistle, with nice fish up to 25 pounds. On Monday we ran north for a halibut and rockfish combo and had two halibut to 53 pounds and limits of rockfish and lingcod. On Tuesday we ended up with only one salmon after trying numerous locations,” added Mitchell.

The salmon remain scattered, but there’s lots of sharks around right now reports Leonard Carter of Crescent City’s Englund Marine. He said, “We’re seeing quite a few Threshers off of South Beach, and guys are actually targeting and landing them. I’ve heard there’s quite a few up in Brookings too. A few salmon are being caught, but there really isn’t any large schools around. Guys have been trying for a couple hours in the morning and maybe catching one or two and then they’re off to catch rockfish. And the rock fishing has been really good, still plenty of lings being caught.”

The ocean salmon fishing has slowed again off of Brookings, although a few fish are being caught in deeper water reports Andy Martin of Brookings Fishing Charters. He said, “Tuna were caught 30 miles out this week, with several sport boats catching a few dozen fish or more. Sunday was the best day.”

Fishing on the lower Klamath has picked up and there’s quite a few steelhead as well as kings around reports Mike Coopman of Mike Coopman’s Guide Service. He said, “The river is in good shape – the extra flows coming from the Trinity are really putting the fish on the move. There’s a good mix of half-pounders and adult steelhead as well as adult kings and jacks to be had,” Coopman added. The salmon bite in the estuary had slowed down, but the bite reportedly picked back up on Tuesday. Boats trolling anchovies are doing well.

Salmon fishing was very good on the Rogue Bay over the weekend but was slower Monday and Tuesday with the smaller tides and warm water according to Martin. “The tides improve this week with a morning incoming and afternoon outgoing, the ideal conditions on the Rogue. Gold and green blades combined with anchovies are working best,” added Martin.