Matt Dallam, left, along with Parliament-Funkadelic legend George Clinton, are all smiles after Clinton reeled in his first-ever Pacific Halibut on a recent trip out of Eureka. Photo courtesy of NorthWind Charters

North Coast offshore anglers will have one less option come Saturday morning as the California Department of Fish and Wildlife announced on Monday the closing of the recreational Pacific halibut fishery on Friday, Sept. 21 at 11:59 p.m. for the remainder of 2018. The quota of 30,940 pounds will be surpassed according to CDFW unless the fishery is closed based on the latest catch projections. California’s 2018 quota is approximately 4,000 pounds less than the 2017 quota.

Beginning in 2015, CDFW committed to in-season tracking of the fishery to ensure catch amounts would not exceed the California quota. The quota amount is determined annually in January through an international process, and is largely driven by results from the annual stock assessment conducted by the International Pacific Halibut Commission (IPHC).

Throughout the season, CDFW closely tracks the progress of the fishery each year to ensure catch amounts do not exceed the California quota. CDFW field staff sample public launch ramps and charter boat landings to monitor catches of Pacific halibut throughout the season, along with other marine sportfish species.

CDFW conferred with NMFS and IPHC on a weekly basis to review projected catch amounts and determine when the quota 2018 would be attained using this information. For current information about the Pacific halibut fishery, science or management, visit https://www.wildlife.ca.gov/Conservation/Marine/Pacific-Halibut

Weekend marine forecast
After a few days of sloppy weather, the ocean looks to be lying down slightly prior to the weekend. Friday, the last day of the Pacific halibut season, looks fishable with winds out of the NW 5 to 15 knots and NW swells 5 feet at 6 seconds. Saturday’s forecast is calling for N winds 5 to 15 knots and NW swells 4 feet at 5 seconds and NW 5 feet at 11 seconds. Seas and wind will both increase on Sunday. Winds will be from the N 10 to 15 knots, with N swells 7 feet at 8 seconds. For an up-to-date weather forecast, visit www.weather.gov/eureka/. To monitor the latest Humboldt bar conditions, visit www.wrh.noaa.gov/eka/swan. You can also call the National Weather Service at 707-443-7062 or the office on Woodley Island at 707-443-6484.

Klamath/Trinity quota updates
According to Dan Troxel, Environmental Scientist on the Klamath River Project, the remaining quota on the Upper Klamath should remain open until October 10. “Both the Upper Klamath and Trinity are managed based upon harvest timing. The Upper Klamath is closed approximately 28 days after the lower river quota is met,” said Troxel.

On the Trinity side, according to Troxel, creel surveys are in progress, with a closing date yet to be determined. Just a reminder, the lower Klamath quota for adult Chinook salmon has been met from the Hwy. 96 Bridge at Weitchpec downriver to the ocean. The section is open to fishing with a daily bag limit of two salmon 22 inches or less. Salmon larger than 22 inches must be released. Please remember that during closures to the take of adult salmon, it shall be unlawful to remove any adult Chinook Salmon from the water by any means.

2018 Chetco River recreational season
The Chetco River fall Chinook State Waters Terminal Area Recreational Season will again be halved and split over two weekends in 2018. The recreational season will be Oct. 6-7 and Oct. 13-14 so more anglers can take advantage of the weekend dates. The fishable area is within three nautical miles of shore between Twin Rocks and the Oregon/California border. The bag limit is one (1) Chinook per angler. Minimum length is 26 inches and the terminal tackle is limited to no more than two single point barbless hooks. For more information, visit https://www.dfw.state.or.us/MRP/salmon/Regulations/docs/2018_Chetco_State_Waters.pdf 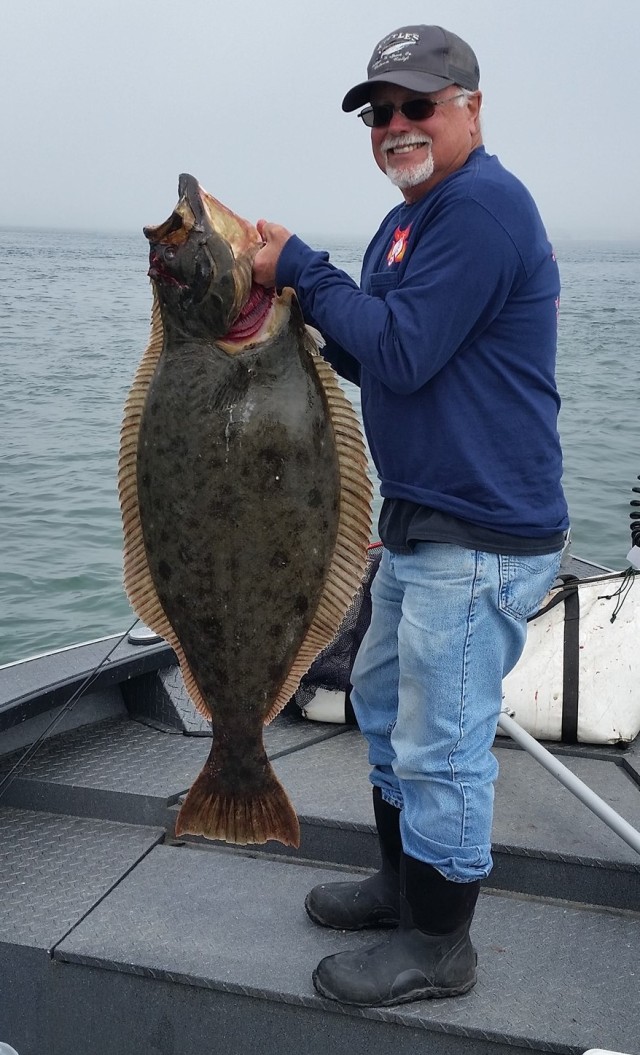 The Oceans:
Eureka
Tuna has been the talk of the town since last Wednesday when Marc Schmidt of Coastline Charters got the tuna party started. He found miles of fish roughly 55-60 nautical miles from the entrance, and put 70 albies on board. That was just the start, the weather was magnificent through Sunday and boats galore made their way to the warm, purple water. “This is the best tuna fishing we’ve had in a long time,” said Tim Klassen of Reel Steel Sport Fishing, who made the run on Friday and Sunday. “There were big areas of fish about 50 miles off of Patrick’s Point. The majority of the fish were peanuts, but everyone had some medium-sized fish along with a few in the 20-30-pound class.” Scores ranged from the 40’s to up to 70 fish per boat. High boat belonged to Schmidt, he put a whopping 96 tuna on board on Friday. Needless to say, everyone caught all they needed.

Shelter Cove
Like the rest of the North Coast, tuna took center stage last week at the Cove. Jake Mitchell of Sea Hawk Sport Fishing was in on the action Thursday, Saturday and Sunday boating a total of 98 albacore. “On Thursday, we ran out to Gorda Valley but didn’t do extremely well,” said Mitchell.  “The boats that went south did much better, so the next couple days we ran down towards Noyo Canyon and saw much better numbers. Friday and Monday, we fished rockfish and it was much better than last week. We scored limits pretty quickly both days fishing mostly around the Old Man.”

Brookings
Lingcod and rockfish continue to provide good fishing out of Brookings when the wind isn’t blowing reports Andy Martin of Brookings Fishing Charters. “The black rockfish limit increased this week from four to five fish. Lingcod remains two.  A few salmon a day are being caught in the Chetco estuary. Two hours before and two hours after high tide has been best. The early arrival of fish in the estuary usually indicates a big run during peak season,” added Martin.

The Rivers:
Lower Klamath
Salmon fishing is “as good as it gets” right now on the lower Klamath reports guide Mike Coopman of Mike Coopman’s Guide Service. “It’s been really good for a while now, we’re seeing fish in every spot from the Glen on up. There’s a good mix of adults and jacks around, I’d say it’s roughly three adults for every jack we catch. Most everyone is having little trouble getting their two-jack limit,” Coopman added.

Lower Rogue
Fishing on the Rogue Bay remains good with limits common for many guides most days according to Martin. He said, “Even though cooler water temperatures are allowing salmon to quickly continue upriver, enough new fish are arriving on each tide to maintain good fishing. The Rogue continues to be the best bet on the entire Oregon Coast.”

Trinity
Not much has changed since last week, we’re still seeing quite a few salmon in the upper Trinity reports Tim Brady of Weaverville’s Trinity Outdoors. He said, “The drift boats are doing well side-drifting roe and on plugs wrapped with sardines. More bank anglers have shown up, with most of them targeting the water below the north fork. The water is still a little high for this time of the year, so it’s been a little tougher on the bank guys. We’re still seeing bright kings, but some are starting to color. There’s a few steelhead being caught as well.”