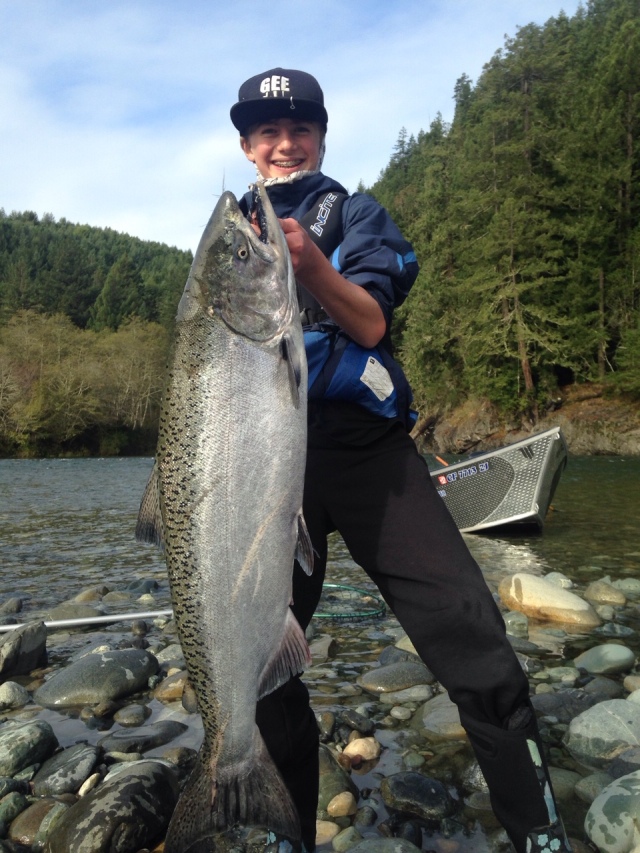 Ryan Rintala, of Truckee, landed a nice late-fall king salmon last November on the Smith River. With rain in the forecast and the rivers on the rise, the Smith and Chetco Rivers will be good bets for the weekend. Photo courtesy of Kenny Priest/Fishing the North Coast

The season’s first sizeable storms are finally filling our local rivers with fresh rainwater. And that means hard-charging, fresh from the salt king salmon – big and bright – will be making their way up all of our coastal rivers starting now. So, if you see a family member duck out early on Thanksgiving Day, or fail to show up, now you’ll know why. A steady stream of drift boats heading north on hwy.101 is also a pretty good indicator. The Smith and Chetco should be fishable on Friday, but both will be on a pretty steady rise. Both rivers should be chocked full of bright kings, and expect plenty of debris and leaves as well. As of Wednesday, the Smith is predicted to peak at just over 7,100 cfs on the Jed Smith gauge on Friday evening. With very little rain predicted for the weekend, the river will drop quickly. It’s forecasted to be back down to 700 cfs by Monday morning. The Chetco will top out at just under 3,000 cfs on Friday night. And like the Smith, expect to battle plenty of fresh kings as well as leaves.

The Mad, Eel, and Van Duzen are all expected to rise substantially and well above the low-flow levels. They’ll likely open to fishing, but don’t expect green water. Before you head out, you’ll want to call the low-flow hotline (707-822-3164) to determine if your favorite river is open or closed to fishing. With rain in the forecast for the foreseeable future, this weekend should be just the first of many opportunities to battle the prized late-fall kings.

“We can expect consistent rainfall through Friday, leading to some pretty impressive rainfall totals,” said Kathleen Zontos of Eureka’s National Weather Service. “In the Smith and Humboldt basins, we’re looking at four to five inches and six to seven in the hills through Saturday evening. Right now, Saturday and Sunday are looking mostly dry. A weak front is expected on Tuesday, with a more robust system hitting the area late Wednesday and sticking around through Friday. Looking further out, the wet pattern will be with us for at least the first couple weeks into December.”

The northern Dungeness crab fishery is delayed until 12:01 a.m. on Sunday, Dec.16, 2018 pending another round of test results tentatively scheduled for Dec. 1. If these results indicate good quality, the fishery will open and be preceded by a 64-hour gear setting period that would begin no earlier than 8:01 a.m. on Thursday, Dec. 13, 2018.

The southern Dungeness crab fishery opened on Nov. 15, except for the area from the southern boundary of Bodega Head State Marine Reserve, Sonoma County north to the Sonoma/Mendocino county line, which was delayed due to domoic acid. Visit https://cdfgnews.wordpress.com/2018/11/20/commercial-dungeness-crab-season-delayed-in-northern-california/ for more info.

ODFW is waiving all fishing licensing requirements on the Friday and Saturday after Thanksgiving to encourage people to experience fishing with friends and family during the long holiday weekend. All fishing, crabbing and clamming in Oregon will be free for both Oregon residents and non-residents. No licenses, tags or endorsements are needed on those days, but all other fishing regulations apply. Visit https://myodfw.com/workshops-and-events/free-fishing-days-nov-23-24 for more info.

Radio tags can often be mistaken for leaders as only the antenna is visible protruding from the fish’s mouth. ODFW encourages anglers to check carefully as it is illegal to harvest these fish.

This telemetry study will help determine the spawning migration pattern of returning Elk River fall chinook. Researchers want to establish whether hatchery origin fish return to the hatchery and fall back before spawning or spawn selectively below the hatchery. Staff installed fixed-station receivers to track the fish weekly and will conduct spawning ground surveys to recover tags. For more information, visit https://www.dfw.state.or.us/news/2018/11_november/112018.asp

In a press release issued on Nov. 16, the California Department of Fish and Wildlife’s (CDFW) Trinity River Hatchery has determined the hatchery will have taken in more than 4,800 fall Chinook Salmon by the end of this week. According to California 2018-19 supplemental sport fishing regulations, the take of 4,800 fall Chinook Salmon at the hatchery triggers the reopening of the recreational Chinook Salmon fishery on the Upper Trinity River between the mouth of Indian Creek, near Weaverville, and Old Lewiston Bridge, at 12 a.m. on Monday, Nov. 19.

Recreational anglers will be able to harvest two Chinook salmon, with no more than one adult greater than 22 inches, per day in this reach. The possession limit is six Chinook salmon, and no more than three adults. For more information, visit https://cdfgnews.wordpress.com/2018/11/16/trinity-river-upstream-of-indian-creek-reopens-for-adult-chinook-salmon-harvest-on-monday-nov-19/

The Smith should open no later than Friday morning, but could potentially open on Thursday. It’s predicted to peak at 7,100 cfs on Friday evening, but this will likely change. The river should be full of bright kings, along with some darker fish that have been holding in the lower river for a while. With the first big rise of the season, you can expect lots of leaves and debris coming down river. Cleaning your gear will be a must. Also expect a crowd, local salmon anglers have been jonesing for this day for weeks.  The daily bag and possession limit is one (1) Chinook salmon and no more than five (5) wild Chinook salmon over 22 inches per year. To see if the river is open to fishing, call the hotline at 707-822-3164. Visit http://cdec.water.ca.gov/river/smithStages.html for current river levels.

This week’s rain should produce the best salmon fishing of the season on the Chetco according to Andy Martin of Wild Rivers Fishing. “There are still plenty of salmon in the ocean waiting for the rain,” said Martin. “This week we released three large kings during our ocean charters off of Brookings. Anytime you catch salmon on shrimp flies there are likely a lot of kings around. Leaves will be an issue when the Chetco comes into shape.” Reminder: The anti-snagging, bobber-only regulations will continue at least through the weekend. ODFW has indicated they will wait until next week to make a decision on the lifting the regulation.  The anti-snagging gear restrictions are described on page 18 of Oregon’s 2018 Sport Fishing Regulation Book.

“The Elk and Sixes will both be full of salmon this weekend but also will be very crowded,” said Martin. “With many Oregon rivers closed to salmon fishing this fall, the two Port Orford-area rivers are the closest options for anglers from most areas of the state. The Elk usually fished well for anglers running plugs the first couple of days after the first big rain of fall and then quickly clears and turns to a back-bouncing show,” added Martin.

“The much-needed rain will definitely change the game on the upper Trinity after the weekend,” said guide Steve Huber. “The salmon season reopened above Indian Creek, which is good news. The steelhead fishing was tough this week with colder conditions.  Boats are still seeing between one to four steelhead per trip. There’s lots of wild fish around, I didn’t catch any hatchery fish this week. I expect to see some better numbers and some more fish after the weekend. With the holiday, the river will likely be crowded for the next few days.”