Winter steelhead season has yet to kick into gear on the North Coast, but changes are a brewing. We have a couple decent storm fronts headed our way that will put all of the coastal rivers on the rise. If the rain comes as predicted, the rivers will see their highest flows this winter, except for the Smith. The Eel, South Fork Eel, Van Duzen, and Mad will all get a good flushing, and will likely be muddy next week. Once they recede to fishable levels, we should see the first wave of winter steelhead make their way into our coastal rivers. After a very short and sub-par late fall salmon season, seeing the rivers loaded with bright steelhead sure would be a welcome sight.

Weather ahead
“A couple of fronts are headed our way and we should begin to see a pattern change by Friday,” said Kathleen Zontos of Eureka’s National Weather Service. “The first system will arrive on Friday afternoon and could drop up to three-quarters of an inch in the Smith basin and up to an inch in the Eel and Mad basins. Saturday is looking dry, with a more robust storm arriving on Sunday afternoon. Rainfall totals will be a little better for this one, with the Smith seeing one to two inches and the Eel seeing up to two and a half inches. Another system is forecasted for Monday and Tuesday, but there’s some uncertainty as to where it will land. Right now, the models are showing three-quarters of an inch in the Smith basin and up to a half-inch locally, but that could go up or down. Wednesday is looking dry, with the next system predicted for Thursday and Friday,” said Zontos.

Commercial Dungeness season delayed again
Poor quality has again delayed the commercial Dungeness crab season on the North Coast. The additional 15-day delay will push the new opener date to Dec. 31. Results from the latest round of quality tests continue to show the crab are not ready for harvesting. Delays due to quality only affect the northern commercial fishery in California Fish and Game Districts 6, 7, 8 and 9 (Mendocino, Humboldt and Del Norte counties). The season in these districts is now scheduled to open at 12:01 a.m. on Dec. 31, 2018, to be preceded by a 64-hour gear setting period that would begin no earlier than 8:01 a.m. on Dec. 28, 2018. The next round of quality testing is scheduled for Dec. 21. If the meat weight to crab weight remains low, the season could be delayed until Jan. 15, 2019. For more information, visit https://nrm.dfg.ca.gov/FileHandler.ashx?DocumentID=162630&inline.

Razor clam fishery remains closed
In a recent blog post, the CDFW is reminding clammers that the razor clam fishery in Humboldt and Del Norte counties is still closed. The sport razor clam fishery closed more than two years ago due to harmful levels domoic acid. Domoic acid levels have not fallen low enough to reopen the sport season according to the state Department of Public Health (CDPH). Levels were recently found to be skyrocketing. Clams tested were found to contain 130-300 parts per million of domoic acid – up to 15 times the 20 parts per million consumption alert level.

“We are concerned about the extremely high domoic acid test results that came in a couple of weeks ago for razor clam,” said Christy Juhasz, an environmental scientist with the CDFW. “We’re taking this opportunity to remind clammers that the razor clam fishery has been closed since April 2016 to protect the public from consuming potentially lethal razor clams.”

The fishery closure prohibits the recreational take and possession of razor clams from Humboldt and Del Norte county beaches. It effectively removed access to one of the tastiest food clams in California with no season reopening in sight, as testing continues to confirm dangerous levels of domoic acid in razor clam populations in the affected counties.

Chetco/Elk/Sixes
Very few salmon are being caught on the Chetco, but steelhead fishing has begun to pick up reports Andy Martin of Wild Rivers Fishing. “There are a bunch of half-pounders, many of them hatchery fish, spread throughout the river. There also are more adult steelhead being caught. The upper river has dark salmon still spawning,” said Martin. Following Friday’s rain, flows are predicted to be between 2,000 and 2,500 cfs for the weekend on the Chetco.

Anglers willing to drag their boats downriver did fairly well on the Elk over the weekend according to Martin. He said, “Bank anglers also got into fish in the deep hole next to the hatchery. Big flows are expected after this weekend’s big storm, which could bring fresh kings into both the Elk and Sixes.” 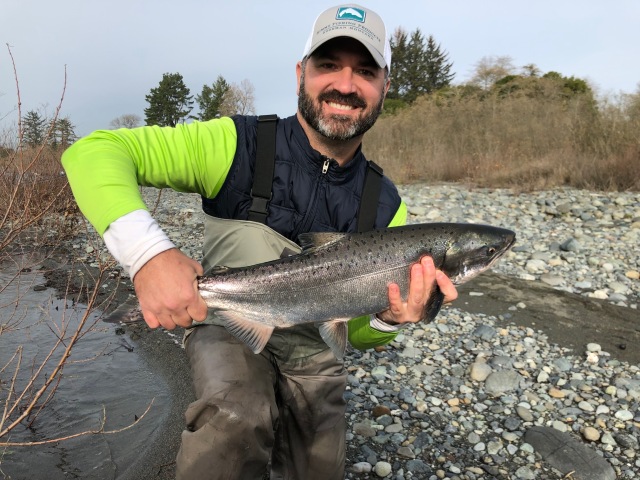 Houston Texas resident Nathan Vajdos landed a late fall-run king salmon on Wednesday while fishing the Smith River. With rain in the forecast, the last of the king salmon will be making their way upriver to spawn while the winter steelhead should begin to make their way into the coastal rivers. Photo courtesy of Mike Coopman’s Guide Service

Smith
“The river came up overnight on Tuesday and was little on the dirty side Wednesday,” said Mike Coopman of Mike Coopman’s Guide Service. “There’s still a few kings in the river, but most are dark. There hasn’t been much in the way of steelhead yet, but hopefully that will change with the next round of storms on the way. We’re predicted to get a decent rise for Saturday, and then another bigger one for early next week. This should open the door for the start of the steelhead run.”

Mad
The Mad opened back up to fishing on Wednesday morning, but it could be a short window. Flows are predicted to drop through Friday morning, with the next rise coming Friday afternoon. There should be some steelhead around, as well as a few late kings. Minimum flows to keep the river open to fishing are 200 cfs.

Main stem Eel
The main stem is low, but holding decent color. The river is full of half-pounders from the forks down, along with a few adults. Most of the fish are in the deeper holes, anywhere there’s broken water. The flows were just above 1,200 cfs on the Scotia gauge on Wednesday afternoon and predicted to hold there until Friday evening. The river is forecasted to rise late Friday and will likely blow out for the weekend and into next week. Minimum flows to keep the river open to fishing are 350 cfs on the Scotia gauge.

South Fork Eel
The South Fork was closed to fishing as of Wednesday, and it likely won’t open prior to the next storm. It’s predicted to rise beginning Friday night and will probably be blown out through the weekend and into next week. Minimum flows to keep the river open to fishing are 340 cfs.

Van Duzen
The Van Duzen was open to fishing as of Wednesday, and could remain open until it starts to rise on Friday morning. The river will likely be muddy on Saturday before it blows out on Sunday. Minimum flows to keep the river open to fishing are 150 cfs.