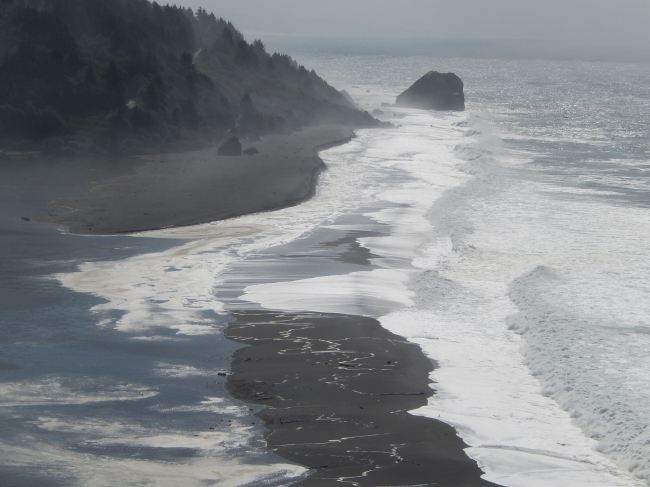 Photo Caption: The Klamath River mouth, seen here from the overlook on the north side of the river, has been opening and closing since the weekend, making it difficult for salmon to enter the river. Large swells are predicted for the weekend and hopefully the mouth can blow wide-open allowing what’s left of the fall run to make their way upriver. (Photo courtesy of Sara Borok, Klamath River Environmental Scientist)

Fishing the North Coast
by Kenny Priest/For the Times-Standard

Along the lines of the ’80s TV commercial for Wendy’s where the old lady shouts, “Where’s the beef?” Klamath salmon anglers have been wondering, “Where’s the salmon?” In truth, no one really knows. What we do know is 11,538 have been harvested below the 101 bridge and another 1,009 have been caught by sport anglers above the bridge. Throw in approximately 54,000 fish that have been harvested by the Yurok tribe and what you’re left with is a lot of missing fish. Sure, there’s a few fish that have squirted through and are now entering tributaries like the Trinity, Shasta, and Scott rivers, but with an in-river return at well over 250,000 predicted, the numbers aren’t adding up. A big part of the problem has been the mouth of the river. Flowing to the south and running narrow and shallow, conditions have been less than ideal for huge pushes of fish to enter the river. And with last week’s storms and big tide swings, it went from bad to worse. Since the weekend, it’s been opening and closing and has created a lake that can be felt all the way to Blakes’ riffle. At the moment, very few fish are entering the lower river and guides are lucky to catch a few a day.

According to Sara Borok, an Environmental Scientist on the Klamath River, we’ve been down this road before. “Back in 2001 we also had a south mouth that hampered the fish coming into the river. “It blew open on September 21 and we had a huge surge of fish pour in,” Borok said. “Although there’s no way to know for sure, my guess it there are still quite a few fish in the ocean waiting for the right conditions to enter.” With big swells again predicted for the weekend, there’s a chance the mouth can finally blow out enough to allow the remaining kings to enter the system and start their journey upriver. Let’s hope so.

Weekend marine forecast
If you’re hoping to fish offshore this weekend, Saturday will be your best bet. South winds are forecasted 5 to 15 knots with swells to 8 feet at 11 seconds.  Sunday isn’t looking as good with south winds to 20 knots and waves out of the west to 14 feet at 14 seconds. For up-to-date weather forecasts, visit http://www.weather.gov/eureka/. You can also call the National Weather Service at (707) 443-7062 or the office on Woodley Island at (707) 443-6484.

HASA meeting
A general membership meeting will be held Oct. 2 at 7 p.m. in Scott McBain’s office at 980 7th Street in Arcata. According to Cliff Hart, President of HASA, discussions will include urgent issues related to Pacific Halibut. “All fisherman and fisherwomen from the North Coast are invited to come and give feedback. We NEED to hear from you. If you can’t make the meeting, please email your comments about the current Pacific Halibut situation and what options you would like to see to: hasa6191@gmail.com. We are in an unfortunate situation where we will lose some halibut fishing. We don’t like any of the options dealt, but we have the ability to recommend. Public comment is open with PFMC, and we may call upon you to write letters and emails.” Hart added. The due date is 10/9/13. For more information, visit http://www.dfg.ca.gov/marine/pacifichalibut.asp

Eureka
According to Tim Klassen of Reel Steel Sport Fishing, the rough ocean we’ve had this week has kept the boats off the water. “The last fishable day was Sunday and we were able to run to the Cape for Rockfish. Since then, nobody’s been out. Friday and Saturday are looking fishable, but it’s coming back up again on Sunday. Hopefully we’ll be able to go one of those days and drift for halibut as the bite has been pretty good. Last Thursday we were able to limit out our four customers” Klassen said.

Crescent City
Little if any angling is happing offshore out of Crescent City reports Chris Hegne’s of Englund Marine. “We’ve had some pretty rough seas this week and no one’s been out. The weekend isn’t looking much better,” Hegnes added.

Low Flow River Closures begin Oct. 1
North Coast rivers that are regulated by low flow closures, including the Eel River, Mad River, Mattole River, Redwood Creek, Smith River and Van Duzen River will begin angling restrictions on October 1st, except for the Mad River, which went into effect September 1st. The Department of Fish and Game will make the information available to the public by a telephone recorded message updated, as necessary, no later than 1 p.m. each Monday, Wednesday and Friday as to whether any stream will be closed to fishing. The rivers can be opened up at anytime. The low flow closure hotline for North Coast rivers is (707) 822-3164. NOTE: The main stem Eel from the South Fork to Cape Horn Dam and the Mattole River will be closed until January 1, 2014

The main stem Eel River from the paved junction of Fulmor Road with the Eel River to the South Fork Eel River. Minimum flow: 350 cfs at the gauging station near Scotia.

Minimum flow: 320 cfs at the gauging station at Petrolia.

Redwood Creek: The main stem of Redwood Creek from the mouth to its confluence with Bond Creek. Minimum flow: 300 cfs at the gauging station near the Highway 101 bridge.

Lower Klamath
According to Mike Coopman of Mike Coopman’s Guide Service, with the mouth opening and closing since the weekend, very few fish are coming in. The big swells aren’t helping much either,” Coopman said.

Alan Borges of Alan’s Guide Service, who’s also working the lower river, reports guides are still struggling to catch fish in any numbers. “The ones we are catching are fresh with sea lice. Hopefully the ocean calms a bit and we can truly see if there are any good numbers of fish left to come in,” Borges added.

Lower Trinity
Curt Wilson of Curt Wilson Fishing Guides reports the rain and fluctuating flows brought a good amount of fish up the Trinity early this week. “The last few days, steelhead have taken over the show around the Willow Creek area. It seems as we are finally seeing the lack of kings we have been hearing about down low really catch up with us. Hopefully a few more decide to show up. The Willow Creek weir counted 140 fish on Tuesday, but most of them were steelhead,” Wilson added.

Find “Fishing the North Coast” on Facebook for up-to-date fishing reports and North Coast river information. Questions, comments and photos can be emailed to kenny@fishingthenorthcoast.com.