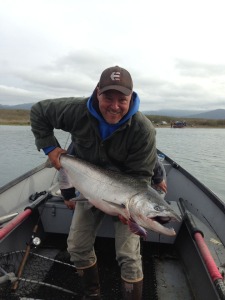 The warm water sitting off our coast is making a real mess of things, and it now looks more and more likely that our sport Dungeness crab season will be delayed because of it. On Tuesday, the CDFW issued a press release stating a delay to the season was a real possibility due to high domoic acid level in many of the marine species along the California coast, including Dungeness crab. Crabs are currently being tested from eight ports from Morro Bay to Crescent City according to Peter Kalvass, who oversees the Invertebrate Management Project. “A massive toxic bloom of the marine diatom Pseudo-nitzschia has resulted in significant impacts to coastal resources and marine life. The algal bloom happens regularly, but due to warmer ocean water temperatures this year (El Nino) the bloom is large and is showing evidence of producing domoic acid, a potent neurotoxin that can accumulate in shellfish, other invertebrates, and sometimes fish, leading to illness and death in a variety of birds and marine mammals. Blooms of Pseudo-nitzschia occur at “hot spots” scattered along the west coast. This is one of the largest and most persistent blooms that we have seen,” added Kalvass.

On Wednesday, The California Department of Public Health (CDPH) issued a health advisory advising individuals to avoid eating rock and Dungeness crab due to the detection of high levels of domoic acid. The advisory was followed by a recommendation from the Office of Health Hazard Assessment (OEHHA) to the California Fish and Game Commission and the California Department of Fish and Wildlife (CDFW) to delay the start of the Dungeness crab season and close the rock crab fishery. These actions would apply to each fishery from the Oregon border to the southern Santa Barbara County line.

These warnings has prompted an emergency meeting of the Fish and Game Commission, which will take place at 8 a.m. on Thursday, Nov. 5 in Sacramento. At that time, the Commission will consider voting to delay the opening of the recreational Dungeness crab fishery. The recreational Dungeness crab season is currently scheduled to start Saturday, Nov. 7.

Weekend weather and forecast
The next storm will move into the area on Saturday evening and could bring with it some decent rainfall totals according to Reginald Kennedy of Eureka’s National Weather Service. “The storm should stick around through at least Sunday night into early Monday morning, and we could see anywhere from three-quarters to an inch of rain in Humboldt. In Del Norte, they may see from an inch to an inch and a half. The coastal mountains will get a good soaking, between two and a half and three inches are forecasted to fall. Monday and Tuesday are both looking dry, but the next system is forecasted for Wednesday night,” Kennedy added.

Klamath steelhead derby Sunday in Happy Camp
The 5th annual Klamath steelhead fishing tournament is scheduled to take place on Sunday, November 8th. Everyone is invited to come and showcase their skills. Check-in will be from 7 a.m. to 8 a.m. at the liquor store in Happy Camp and weigh-ins will be at the bulk plant at 5 p.m. The boat with the largest steelhead measured in length will win the competition. Each boat will need a camera and a tape measure to capture the fish, along with the issued playing card the boat captain receives at check-in will need to be in the photograph to be considered. The captain of the winning boat will receive a trophy to do with what they please and retain the bragging rights for a year. Motors will be allowed this year below Gordon’s Ferry, and you can fish any stretch of the river you like. Shuttles will be available at check-in and will cost $20.00 per vehicle. If you have any questions give me call Mario Gomez at 530-598-0530.

Smith River
The river opened up on Sunday and we had a two really good days of fishing reports Mike Coopman of Mike Coopman’s Guide Service. He said, “There were quite a few caught on Sunday and Monday, and some real big ones too. Most of the fish had some color, but they were in great shape. A lot of the fish had probably moved up from the lower river with the rise, and I’d be willing to bet that quite a few new ones came in from the ocean and stopped down low. The next rise, which looks like it will be Sunday, should bring in some more fish and I’d expect the fishing to be excellent,” added Coopman.

Chetco
Fishing on the Chetco was a little tough on Wednesday according to Alan Borges of Alan’s Guide Service. “I think the lower river is fishing a little better as the river drops. I heard there were some fish kegged in the holes above and below the North Fork. Most of the big, deep holes have fish in them and there’s a mix of darker fish and newer ones. It’s been real clear in the morning and the suns on the water early, which makes it tough to get the fish to bite in low water conditions,” Borges added.

Klamath
Lower
Not many anglers, if any, are still fishing the lower river, though salmon continue to trickle into the estuary. This is typically the time of the year when salmon that spawn in some of the larger tributaries begin to come into the river anticipating rain to increase flows in the creeks and tributaries.

Trinity
Most of the action is taking place in the Junction City area reports Steve Huber of Steve Huber’s Guide Service. “The fishing is nothing earth shattering, but most of the boats are landing between two and five steelhead per trip, with a 50/50 mix of hatchery and wild. The rain we had last weekend helped move some fish around, but it dropped back down quickly. There are a few salmon around, but most anglers are targeting steelhead now. We definitely need a good shot of rain to get the fish on the move and to get the creeks flowing,” Huber said.