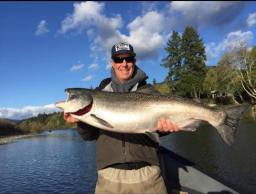 Finally some rain! Both the Chetco and Smith saw sizable rises on Wednesday and should fish well for the next few days. But if you want in on the action, you’ll need to act quickly. The forecast for the next few days is calling for very little precipitation, which will turn the rivers quickly back to low and clear. The Smith will be the first to clear, with flows predicted to drop below 800 cfs by Saturday morning. The Chetco is on the drop as well, though much slower due to snowmelt, with flows dropping to 1,400 cfs by the end of the weekend. If you’ve yet to get your fill of salmon fishing, you’ll want to be on either of these rivers the next few days. For current Smith River conditions, visit http://cdec.water.ca.gov/river/smithStages.html. For the Chetco, visit http://waterdata.usgs.gov/usa/nwis/uv?site_no=14400000

Weekend forecast
A little more rain than expected fell Tuesday night and really put the Smith and Chetco on the rise. Another half-inch was predicted to fall overnight on Wednesday, and then it looks like the rain will taper off according to Reginald Kennedy of Eureka’s National Weather Service. “Light rain showers are forecasted for the Smith basin on Friday and Saturday. Totals with be small, only a tenth or less is predicted to hit the ground. Sunday and Monday should be dry and the next system to bring periods of rain will be Tuesday and Wednesday. We could see from an inch to an inch and a half in Humboldt and up to two inches in the Smith basin,” Kennedy added.

Rock crab and Dungeness crab samples were collected last week from both the Morro Bay and Monterey areas, while rock crab was collected from the Santa Barbara coast and the northern Channel Islands.

Dungeness crab samples were also collected this past weekend out of Half Moon Bay and Bodega Bay, and this week from the northern ports of Crescent City, Eureka, Trinidad, and Fort Bragg. Crab will continue to be sampled from each port area until all crab at that location test below the CDPH Food and Drug Branch alert levels for domoic acid of 30 ppm for two consecutive rounds of sampling. For up-to-date testing results, visit http://www.cdph.ca.gov/HealthInfo/Pages/fdbDomoicAcidInfo.aspx

Portion of Oregon Coast closed to crab harvesting
The Oregon Department of Agriculture and the Oregon Department of Fish and Wildlife have announced last Friday, Nov. 13, the immediate closure of recreational and commercial bay crabbing from Heceta Head, north of Florence on the Oregon Coast, to the California border due to elevated levels of domoic acid. This includes crab harvested in bays and estuaries, and off docks, piers, jetties, and the ocean.

Crab harvesting from Heceta Head north to the Columbia River remains open, although it is recommended that crab always be eviscerated prior to cooking. Evisceration includes removal and discard of the internal organs and gills. Despite the closure, crab and shellfish products sold in retail markets and restaurants remain safe for consumers.

HASA looking for halibut input
The Humboldt Area Saltwater Anglers are looking to get anglers opinions on the Pacific halibut season structure based on your experience during the 2015 season. While the 2016 season structure will likely be a repeat of the 2015 season structure, HASA would still like to get your input so we can best represent Northern California Pacific halibut anglers. The survey should take less than 5 minutes, and the first slide will provide more detailed background on the issues. If you have any questions can be emailed to hasa6191@gmail.com. The take the survey visit https://www.surveymonkey.com/r/L2C6XCG

CDFW to host public groundfish management meetings
The California Department of Fish and Wildlife (CDFW) will hold five public workshops to discuss groundfish management in California. An overview of recent groundfish management and science developments will be presented and you’ll have the chance to participate in focused stakeholder discussions on potential changes to recreational and commercial fishery management measures for 2017 and 2018. Several new groundfish stock assessments were conducted in 2015 and results show some previously overfished stocks have been restored, which could lead to increased fishing opportunities. The first workshop will be held in Eureka on Dec. 2 at the Wharfinger Building located at 1 Bay St. The meeting is scheduled from 5 p.m. until 8:30 p.m. For a complete list of these public meetings and more information, visit www.wildlife.ca.gov/Conservation/Marine/Groundfish/2017-2018.

The Rivers:
Other than the Smith, all North Coast rivers subjected to low flow fishing closures, including the Eel, Mad, Redwood Creek, and Van Duzen are closed as of Thursday morning. The Mad opened on Wednesday, but was closed back up on Thursday morning. Sections of rivers that are open include the main stem Eel River from the paved junction of Fulmor Road to its mouth, the main stem Mad River from the Hammond Trail Railroad Trestle to its mouth. Be sure and call the low flow closure hotline, (707) 822-3164, to determine if the river is open prior to fishing.

Chetco River
Prior to yesterday’s rise, salmon fishing on the Chetco had been slow. Reports indicated the fishing was good on Tuesday during the rise, but muddied up pretty good on Wednesday with only a handful of people trying. It was predicted to peak at just over 3,000 cfs on Wednesday evening and will be on a slow drop through the weekend.

Smith River
The Smith peaked at just over 5,400 cfs around noon on Wednesday on the Jed Smith gauge, and a bunch of brand new fish made their way into the lower river reports Mike Coopman of Mike Coopman’s Guide Service. He said, “The river came up quite a bit, and brought with it a pretty good slug of fish. The bright fish definitely outweighed the older ones on Wednesday, which hadn’t been the case for awhile. It looks like we’ll have some water for a few days, so I’d expect the fishing to be good through the weekend,” Coopman added.

Upper Trinity
Not much rain has fallen in the Trinity area, and it remains low and clear reports Steve Huber of Steve Huber’s Guide Service.”Conditions aren’t perfect, but there are a few fish around. Junction City continues to be the spot where most of the boats and bankies are concentrating, and the pressure is pretty high. We definitely need some rain to get the fish moving, most are just hanging out waiting for the creeks to rise. Boats are getting anywhere from 2 to 8 fish per trip, and almost everything is catching fish; flies, roe, plugs and spinners,” Huber added.