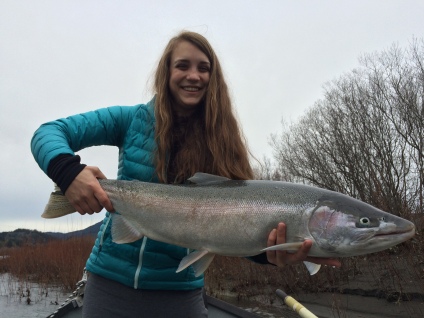 Ashley Kay from Arcata landed this big hatchery buck on a recent drift down the  Chetco River while fishing with Tony Sepulveda of Green Water Fishing Adventures.

The 3rd annual Humboldt Steelhead Days will take place this weekend — fishable rivers or not. Parties and demonstrations will kick-off the event this Friday near three watersheds — the Mad, Eel and Trinity rivers. Register for the fishing and photo contests and learn more about all the events going on during the two-week period at either the Mad River Brewing Co. Tap Room in Blue Lake, the Fortuna River Lodge in Fortuna or at Coho Cabins in Willow Creek. All three kick-offs begin around 5 p.m. and each event is slightly different. For all the details, visit the Humboldt Steelhead Days website (humboldtsteelheaddays.com) or the HSD Facebook page.

Demonstrations will be held in Fortuna, along with the kick-off party where the theme is “What’s happening in the Eel River?” HSD guests can walk through the River Lodge and take a virtual tour of the Eel River watershed. Speak to the people who work on restoration of fish passage, improvement of fish habitat, recovery plans, monitoring Eel River fish, and learn the latest information about catching Eel River steelhead. Catch the film “Wild Reverence, the wild steelhead’s last stand,” by Shane Anderson from 7:30 p.m. – 9 p.m.

The HSD prize pool is nearly $4,000, with two guided river trips (Klamath and Eel) as well as an ocean trip (Trinidad) going as the top prizes. Enter your steelhead photo (please keep the wild ones wet) by sending it to the HSD Facebook page with the hashtag #humboldtsteelheaddays anytime during the contest (Jan. 23 to Feb. 6). Anglers will also have a chance to win rods, reels, fishing lures, boat heaters, a Thule car rack, Kokatat life jackets and propane. Gift certificates totaling $250 were donated by Pacific Outfitters and Mr. Fish Seafood.

Weather update
After a small break in the storms, more rain is on tap beginning Thursday according to Reginald Kennedy of Eureka’s National Weather Service. “Light rain will fall on Thursday, but a wetter system will arrive in the evening and last into Friday. Rainfall predictions range from one to two inches in both Humboldt and Del Norte counties. Another system will roll into the area on Friday night, bringing with it another one to two inches. We’ll have a brief dry period beginning Sunday and lasting through Monday. A weak system will move in on Monday night into Tuesday, dropping up to three-quarters of an inch. At this point, next Wednesday is looking dry, but more storms are forecasted for Thursday through Saturday,” Kennedy said.

The Rivers:
Chetco River
Running at 8,800 cfs on Wednesday afternoon and dropping. It’s forecasted to dip down to 5,400 cfs early Friday. If the river is anywhere near green, the plunkers should be out in force.

Smith River
The Smith remains just about the only game in town reports guide Mike Coopman of Mike Coopman’s Guide Service. He said, “When the rivers been at a fishable height, the plunkers have been doing well. There’s seems to be quite a few fish in the river, even with all the high water we’ve had. Looking at the forecast for the next few days, we should get a couple days of side-drifting in.”

Eel and Van Duzen rivers
As of Wednesday, the main stem Eel was running at nearly 60,000 cfs and starting to drop. With more rain on the way, it’s predicted to jump up to over 90,000 cfs by Saturday. The entire South Fork is still high and muddy, and flowing at 12,000 on the Miranda gauge as of Wednesday. The incoming storms will likely push it to 20,000 cfs. After reaching flood stage last Friday, the Van Duzen has dropped back down to 5,700 cfs on Wednesday. The reprieve will be short lived, the next round of storms should put it right back 20,000 cfs, which is near monitor stage.

Mad River
After reaching 41,000 cfs on Sunday, the Mad was back down to 9,000 cfs on Wednesday and dropping. It should drop low enough for the liners to get back on the water Thursday, but we’re a long ways away from anything close to green water.

Trinity
The very top of the Trinity is the only place where you’ll find green water at the moment reports Steve Huber of Steve Huber’s Guide Service. “It’s really only fishable from Lewiston Bridge down to Rush Creek. Both Rush and Weaver Creek are full of mud, making fishing below tough to impossible,” Huber added.