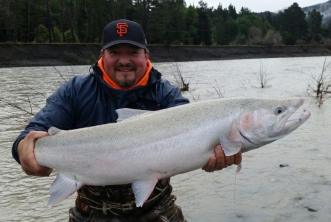 Richard Burrow of Eureka landed this beautiful winter steelhead last Sunday on the Mad River. The Mad, as well as all of the coastal rivers, are expected to see significant rises by the weekend due to the incoming storms. Photo courtesy of Scott Grant

Mother Nature provided just enough time in between big storms to drop the Smith and Chetco rivers back into pristine shape. The break, however, was short-lived. Another wet storm is on the way, which is forecasted to blow out the two quick-clearing rivers as well as insuring the other coastal streams won’t be green and fishable any time soon. The good news is the two rivers – during their brief driftable stint – were loaded with fresh steelhead. Hopefully when the rivers recede and clear, we can pick up right where we left off.

Weekend Weather:
The forecast is calling for the next couple of days to be very wet say’s Reginald Kennedy of Eureka’s National Weather Service. “We’re expecting a pretty good shot of rain on Thursday and Friday. The Smith/Klamath basin will see from three to five inches with two to four inches falling in the Humboldt area. Saturday will be a showery day, with rainfall totaling another quarter to half inch. Snow levels will be in the 2,500 to 3,000 foot level. Sunday will be mostly dry, with a few lingering showers that will give way to a dry day on Monday. An unsettled pattern will begin on Monday night into Tuesday, bringing with it more showers. Wednesday is looking dry, but another half inch of rain is forecasted for Thursday.” Kennedy added.

Salmon/steelhead report cards due
CDFW would like to remind sport anglers that the 2015 sport fishing report cards need to be submitted by January 31, even if divers and anglers were unsuccessful or did not fish at all. Anglers and divers can go online to submit their abalone, lobster, salmon, steelhead and sturgeon report cards required by the CDFW. Reporting requirements for anglers and divers have not changed, but this online submission option makes the reporting faster and easier. For additional information on harvest reporting requirements, please visit https://www.wildlife.ca.gov/Licensing/Fishing#758846-harvest-reporting

Humboldt Steelhead Days weekend events
CalTrout brings The International Fly Fishing Film Festival to the Eureka Theatre this Friday, Jan. 29 as part of the Humboldt Steelhead Days. The International Fly Fishing Film Festival consists of shorts and feature length films produced by professional filmmakers from all corners of the globe, showcasing the passion, lifestyle and culture of fly-fishing. Humboldt Steelhead Days registrants get $5 off at the door. All ages are welcome. Doors open at 6:00 p.m. Join CalTrout for a pre-film social hour. For more information, visit http://www.theeurekatheater.org/upcoming-events.

On Saturday January 30, free family events will be held from 11:00 a.m. to 4:00 p.m. at the Adorni Center in Eureka. Learn how to rig, tie flies, and cast for steelhead and then practice in the 5-hole casting course – fun for all ages and all skills! Learn about your local watershed restoration and fish population status. This event is being offered in partnership with the Eureka Crab Celebration.

HASA membership meeting coming in February
HASA (Humboldt Area Saltwater Anglers) will be having their general membership meeting on Thursday, February 4, 2016 at 7 p.m. at the Grace Baptist Church, 220 Buhne Street, Eureka. They will be taking nominations and voting for board members. Other business will also be discussed. For more information, contact Scott McBain at hasa6191@gmail.com or 707-845-0101.

The Rivers:
Chetco River
After a long spell of unfishable conditions, the Chetco dropped back into fishable shape on Tuesday reports guide Alan Borges of Alan’s Guide Service. He said, “The river was in pristine condition on Wednesday, and there were lots of fish around. I saw fish caught from the top to the bottom, with quite a few hatchery fish mixed in as well. If the forecast holds, it looks like the Chetco will blow out sometime on Thursday. Hopefully we can get back on the water by early next week.”

Smith River
The Smith fished really well all week reports guide Mike Coopman. “During last weekend’s high water, we put some real good days together plunking on the lower river. We were back to side-drifting on Monday, with most of the guide boats landing between three to four fish per day. With more rain on the way, it looks like we’ll be off the water for a couple days, but hoping to get the weekend in,” Coopman added.

Eel and Van Duzen rivers
As of Wednesday, all three systems remained unfishable. With more rain on the way, it will be some time before they get anywhere near green. The Van Duzen is expected to surpass monitor stage on Friday afternoon, but it’s predicted to drop quickly. Same story for the main Eel as it’s predicted to reach monitor stage at Fernbridge on Saturday.

Mad River
After dipping below 5,000 cfs on Wednesday, the Mad is predicted to head back towards monitor stage following the rain on Thursday and Friday. We’ll need at least a solid week of dry weather before it becomes bait fishable.

Trinity
Above the North Fork is your best chance at finding some good water at the moment reports Steve Huber of Steve Huber’s Guide Service. “With a bunch more rain coming, the entire river could blow out again. I haven’t heard any reports, but the upper section down to Junction City should have some fish in it,” Huber added.