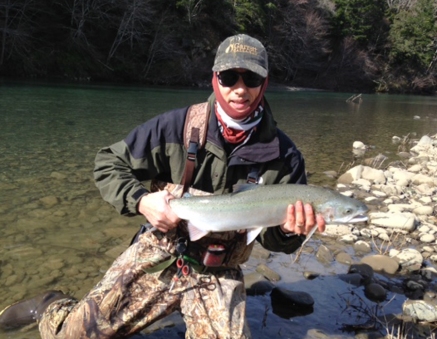 Albert Larcina of San Rafael landed this nice steelhead on a recent outing to the South Fork Eel River. Except for the main stem of the Eel, Trinity, Klamath and the Smith, all other coastal rivers, including the Chetco, will close to fishing after March 31. Photo courtesy of Albert Larcina

It’s been quite a few years since we’ve headed into a salmon season with this much uncertainty. With the number of salmon swimming off North Coast waters on a pretty sharp decline, all bets are off as to how bad or good the fishing will be. Hopefully we’ll be talking about the latter on Saturday morning as the recreational salmon season will open from Horse Mountain south to the U.S. – Mexico border. The Pacific Fisheries Management Council has forecasted 299,600 Sacramento River salmon to be swimming in the ocean along with another 142,200 Klamath River salmon — which is about half as many as last year. That’s the bad news. The good news is the ocean should be plenty fishable out of Shelter Cove or Fort Bragg over the weekend. As of Wednesday, light winds were forecasted to blow on Saturday from north at 5 knots with waves coming out of the west 6 ft. at 13 seconds.  A mixed swell is forecasted for Sunday. Winds will be out of the east at 5 knots, with waves coming from the southwest 2 ft. at 5 seconds and from the west 5 ft. at 13 seconds. For an up-to-date marine forecast, visit http://marine.weather.gov/MapClick.php?lon=-124.11255&lat=40.03701#.VvxNx3oUPg4

The three season alternatives from the area between Horse Mountain and Point Arena all have the season opening on April 2, though all have different lengths and end dates.

The daily bag limit will remain at two Chinook salmon, with a minimum size limit is 20 inches total length. All of the season alternatives can be found at http://www.pcouncil.org/wp-content/uploads/2016/03/Preseason_Report_II_2016_final.pdf and will be finalized at the PFMC meeting in Vancouver, WA on April 8-14.

The sport opener for water north of Horse Mountain – the California KMZ – will be determined at the same meeting. Currently, three options are on the table for OR/CA border to Horse Mountain (which includes Humboldt County).

All options would be for all salmon except Coho, two fish per day, 20-inch minimum size, with fishing allowed seven days per week.

Upcoming events
HASA dinner April 30
The annual HASA fundraiser dinner will be held Saturday, April 30, from 6 p.m. to 9 p.m. The popular event has changed venues this year and will be moving from Redwood
Acres to the Arcata Community Center, 321 Dr. Martin Luther King Jr. Parkway in Arcata. Tickets are $25 for adults and $10 for children. Food will be provided by Ramone’s and some great items will be auctioned and raffled off. Each ticket will get you a HASA annual 2016 membership as well as entry into our door prize. Dinner, auction and raffle tickets are available from any HASA board member or from the following merchants: Ace Hardware, McKinleyville; Bucksport Sporting Goods, Eureka; Englund Marine, Eureka; Englund Marine, Crescent City; Mad River Tackle, Arcata; Pacific Outfitters, Eureka; RMI Outdoors, Eureka; and W&W RV & Sporting Goods, Eureka. For more information, email hasa6191@gmail.com or call (707) 845-4106.

The fishing tournament begins at sunrise with the check-in deadline at 2:00 p.m., prize presentations will begin at 2:30 p.m. with the fish fry beginning at noon. The fish fry fundraiser is open to the public and admission is only $10.00 for adults and $5.00 for juniors. Children 6 and under get in free. Adult fishing tournament entry is $20.00 and junior entry (under 16) is $10.00.

Tournament day registration is available at the Peninsula Elementary School in Samoa beginning at 6 a.m. or your entries can be purchased at Mad River Tackle in Arcata, Pacific Outfitters, Englund Marine, or RMI Outdoors. For more information, call (707) 443-9042 or visit http://www.samoafire.org

Steelhead river closures
Except for the main stem of the Eel, Trinity, Klamath and the Smith, all other coastal rivers, including the Chetco, closed to fishing after March 31. The main stem Eel, from Fulmor Road to the South Fork, will remain through September 30. Only artificial lures can be used, no bait. The Smith River, from its mouth to the confluence of the Middle and South Forks, will be open through April 30. Barbless hooks are required and bait is legal. The Klamath and Trinity rivers are open year-round. For up-to-date regulations, be sure to pick up the 2015-2016 supplement or visit http://www.wildlife.ca.gov/Regulations

The Rivers:
Main Stem Eel
The main stem remains blown out, currently running at just under 10,000 cfs as of Wednesday. According to Paul Grundman of Rio Dell’s Grundmans Sporting Goods, it will be another week to 10 days before it’s fishable.

Smith River
The Smith is holding right around nine feet on the Jed smith gauge and the fishing has remained pretty good this past week reports guide Mike Coopman. He said, “The river has been holding its color pretty well, likely from the snowmelt. There isn’t much fishing pressure left, but there’s plenty of fish around to make a good day. Almost all of the fish we’ve caught this past week have been downers, and we’re landing anywhere from two to 10 a day.”

Send in your fish photos
Land a big steelhead or perch lately? Or maybe your friend or relative has reeled in their first fish.  Email your fishing photo to kenny@fishingthenorthcoast.com and I’ll run them with the “Fishing the North Coast” weekly column and also post them on the digital version on times-standard.com. Just include the name of the person in the photo, where and when it was taken and any other details you’d like to share.