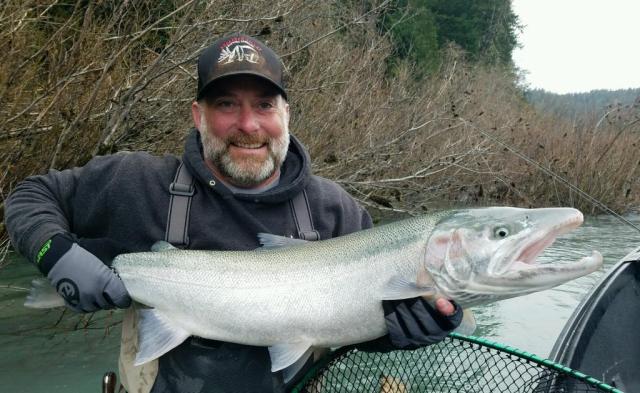 San Jose resident Jim Kirkland landed this beautiful steelhead while drifting the Smith River on Monday. Fishing has been excellent on the Smith this week due to ideal flows and water color. It is predicted to blow out on Thursday, but should be back in shape by the weekend. Photo courtesy of Alan’s Guide Service

Still reeling from four years of drought and less than ideal ocean and river conditions, it’s no surprise that the number of returning Fall Chinook to the Klamath Basin in 2016 were the lowest on record. According to the CDFW, the 2016 preliminary postseason river run size estimate for Klamath River Fall Chinook was 27,353 adults compared to the preseason-predicted river run size of 54,000. Only 15,818 adults escaped to natural spawning areas, which was well below the 40,700 adults needed for the conservation objective. While this is the lowest return since 1978, it’s also worth noting that the creel surveys and counts were hampered by storms that began in early Oct.

The estimated hatchery return was 3,578 adults. Jack returns to the Klamath Basin totaled 2,786 including 1,894 that escaped to natural spawning areas. Spawning escapement to the upper Klamath River tributaries (Salmon, Scott, and Shasta Rivers), totaled 5,462 adults. The Shasta River has historically been the most important Chinook salmon spawning stream in the upper Klamath River, supporting a spawning escapement of 27,600 adults as recently as 2012 and 63,700 in 1935. The escapement in 2016 to the Shasta River was 2,889 adults. Escapement to the Salmon and Scott Rivers was 1,058 and 1,515 adults, respectively.

Next up is the annual Ocean Salmon Information meeting, which will be held March 1 from 10:00 a.m. to 4:00 p.m. at the Sonoma County Water Agency office located at 404 Aviation Blvd. in Santa Rosa. Ocean abundance will be discussed, which will then trickle down to river quotas. For more information on the meeting, please contact CDFW Environmental Scientist Kandice Morgenstern at 707-576-2879 or visit www.wildlife.ca.gov/oceansalmon

The weather ahead
“After a nice little break from the rain, we’re once again heading into a wet pattern,” said Reginald Kennedy of Eureka’s National Weather Service. ”Precipitation is in the forecast for Thursday, where we could see up to an inch of rain throughout the day and evening. A system coming up from the south will bring unstable and cooler air on Friday and Saturday, but not much in the way or rain. We may see only a quarter inch. Light rain on Sunday will be followed by heavier rain in the evening. We’ll see anywhere from a half to an inch and half during the night. Monday looks to be the wettest day, where we could see up to three inches of rain. Lingering showers will persist on Tuesday and Wednesday, but not much will accumulate. As of now, Thursday and Friday are both looking dry.”

Sport-harvested bivalve shellfish not safe for consumption
In a press release issued on Monday, The California Department of Public Health is advising consumers not to eat recreationally harvested mussels, clams or whole scallops from Humboldt and Del Norte Counties. Dangerous levels of paralytic shellfish poisoning (PSP) toxins have been detected in mussels from this region. The naturally occurring PSP toxins can cause illness or death in humans. Cooking does not destroy the toxin. Consumers are also reminded to avoid consumption of crab viscera from crabs caught in the affected area as crabs do consume bivalve shellfish and could accumulate some of the PSP toxin in their gut. Crab meat is not affected by PSP toxin. There have been no reports of illnesses related to this event. For additional information, please visit http://www.cdph.ca.gov/Pages/NR17-022.aspx

The Rivers:
Chetco/Elk/Sixes
“The Chetco fished surprisingly well on Monday, even though it was running at 6,000 cfs,” said Andy Martin of Wild Rivers Fishing. “I was set to go to the Elk, but heard the plunkers did well over the weekend on the Chetco, so we launched at the South Fork and had 10 hookups on Monday. A slide overnight, however, made the Chetco unfishable on Tuesday. The water was the dirtiest it’s been all season. The slide is somewhere above the South Fork, and as of Tuesday night the river was still too dirty to fish, even though it was down to 3,900 cfs. With more rain, it looks like the Chetco will be too high to fish through the weekend.

The Elk fished well Sunday and Monday, while the Sixes was fair on Tuesday. Most boats had multiple fish on the Elk on Sunday, when it got down to 5.2 feet. On Monday it was down to 4.5 and fished well. The Sixes was in shape Tuesday, but most boats go only one fish.”

Smith River
The Smith dropped back into driftable shape on Sunday, and boats are catching good numbers of big and bright steelhead. Scores ranged from one to four fish per boat, with some real big ones in the mix. As of Wednesday, flows were just above 6,000 cfs at the Jed Smith gauge and the color a perfect emerald green. The forecast is calling for off and on heavy rain starting Wednesday night and into Thursday, pushing the height up to 16-feet by mid-day Thursday. It might be a little high to side-drift on Friday, but the weekend and Monday are looking good.

Eel and Van Duzen rivers
Much like last week, the main stem Eel, South Fork Eel, and the Van Duzen were all on the drop this week. But with the rain returning on Wednesday and Thursday, all are forecasted to be back on the rise. With the storm door open, it’s doubtful any of these rivers will turn green before the end of next week.

Mad River
The Mad was roughly 10-feet as of Wednesday and still off color. According to Justin Kelly of Eureka’s RMI Outdoors, the river is dropping quickly, but is forecasted to rise starting Thursday morning. “There hasn’t been many fish around; the liners haven’t been doing very well. Hopefully this next rise will bring in some new fish,” added Kelly.

Upper Trinity
“The upper Trinity has dropped back into shape,” said Steve Huber of Steve Huber’s Guide Service. “Water levels are a little high right now, but the color is good. As of Wednesday, the river was fishable from Lewiston down to the North Fork. If the rain comes as forecasted, it will push everybody back to Lewiston to Indian Creek Lodge. The fishing pressure has been light, which is to be expected with Hwy. 299 still closed and the issues with the Feather River.”