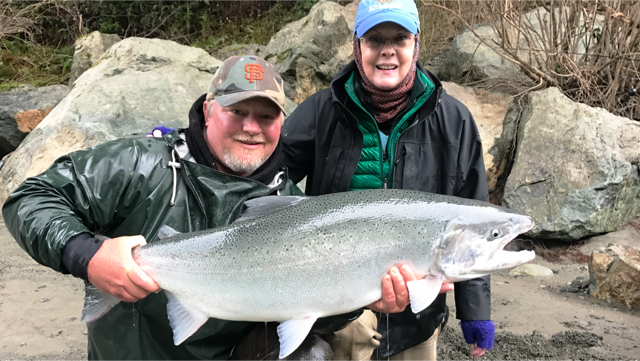 Guide Mike Coopman holds a once-in-a-lifetime steelhead caught by Joanne Ocalaghan of Vacaville last Wednesday on the Smith River. The steelhead, which was released and not officially weighed, measured 42 inches long with a 23-inch girth and was estimated to weight over 28-pounds. The state record for steelhead is 27.4 pounds and was caught on the Smith River in 1976 Robert Halley. Courtesy of Mike Coopman’s Guide Service

There’s hope on the horizon for North Coast steelhead anglers. Even though you’ll see off and on rain through the weekend and into Monday, an extended period of sunshine and warmth is expected to arrive early next week. The dry weather will hopefully stick around long enough to give us a shot at some of the other coastal rivers that have been blown out since early January. The South Fork Eel, Van Duzen, Mad, and Redwood Creek should all have a chance at turning green before the rain returns, which is expected to be sometime around the middle of March. In the meantime, the Smith and Chetco are both receding quickly from the latest storms and will be in great shape this weekend. If you plan to fish either, keep in mind the Rowdy Creek Fish Hatchery Steelhead Derby is taking place Friday and Saturday. A total of 18 teams, consisting of 36 boats will be splitting time between the two rivers.

The weather ahead
“A series of weak systems are forecasted for the area through Monday, and then we’ll see an extended break in the rain,” said Reginald Kennedy of Eureka’s National Weather Service. “The Smith basin will see isolated rain and snow showers on Thursday, but we should be dry in Humboldt. Light showers are on tap for Friday and Saturday, where we can expect around a half-inch of rain over the two-day period. A stronger system is forecasted for Sunday, with the heaviest rainfall hitting Mendocino County. The Eel River should see a slight increase in flows. Up to a half-inch of rain is predicted for Del Norte and Humboldt may see a quarter. We’ll see some lingering showers on Monday, but Tuesday we’ll start to dry out. A warming trend will set in, and it’s possible we’ll stay dry through March 10.”

2017 Salmon Information Meeting
The Department of Fish and Wildlife is holding its Annual Ocean Salmon Information Meeting on March 1 from 10:00 a.m. to 4:00 p.m. The meeting will be held at the Sonoma County Water Agency office located at 404 Aviation Blvd. in Santa Rosa. A review of last year’s ocean salmon fisheries and spawning escapement will be presented, in addition to the outlook for this year’s sport and commercial ocean salmon fisheries. Anglers are encouraged to provide input on potential fishing seasons to a panel of California salmon scientists, managers and representatives who will be directly involved in the upcoming Pacific Fishery Management Council (PFMC) meetings in March and April. For more information on the meeting, please contact California Department of Fish and Wildlife Environmental Scientist Kandice Morgenstern at (707) 576-2879 or visit the Department’s Ocean Salmon web page at www.wildlife.ca.gov/oceansalmon

IF4: International Fly Film Festival showing this Saturday as part of Humboldt Steelhead Days
As part of Humboldt Steelhead Days, the IF4: International Fly Film Festival comes to Humboldt on Saturday, February 25 at the Minor Theater in Arcata. The IF4 consists of short and feature length films produced by professional filmmakers from all corners of the globe, showcasing the passion, lifestyle and culture of fly fishing. Admission is $15 for adults and $10 for children under 12 years old. For more information, visit http://www.flyfilmfest.com

The Rivers:
Chetco/Elk/Sixes
The Chetco is high and muddy, but looks like it will fall into shape just in time for the Rowdy Creek Derby, which kicks off on Friday,” said Andy Martin of Wild Rivers Fishing. “It has been unfishable since last week. A couple of boats tried on Sunday but it was still a little too high and there weren’t any fish caught. The plunkers did catch some fish on Saturday at Loeb Park. The Elk was in great shape Saturday and Sunday, but blew out on Monday. It was up to 7 feet on Tuesday, but should be fishable by sometime Thursday. The Elk has been fishing pretty well, although heavy boat traffic has dropped the catch rates. The Sixes has been too high and off color to fish.”

Smith River
Water levels on the Smith continue to fluctuate wildly. The only thing that’s been consistent is the steelhead. Drift boats were back on the water over the weekend, with quite a few fish being caught on Saturday. The rain machine kicked back in on Sunday, and the catch rate went way down due to the rising water. The river was blown out on Monday and Tuesday, but dropped enough on Wednesday to get the plunkers back on the water. With very little rain in the forecast for the next few days, the Smith will be in great shape for the weekend.

Eel and Van Duzen Rivers
The main stem Eel, South Fork Eel, and the Van Duzen all remain high and unfishable. They are all currently receding, but Sunday’s storm, which will bring heavier rain amounts to Mendocino, will put them back on a slight rise. Dry weather is in the forecast after Monday, so the Van Duzen and South Fork Eel could be down to fishable levels by next weekend. Slides however, could keep both off-color.

Mad River
With the river high and muddy, there’s been very little fishing pressure this week reports Justin Kelly of Eureka’s Redwood Marine “I haven’t heard of any fish being caught, I don’t think there’s many around right now. The river will take a couple weeks with no rain to even have a chance of turning green,” Kelly added.