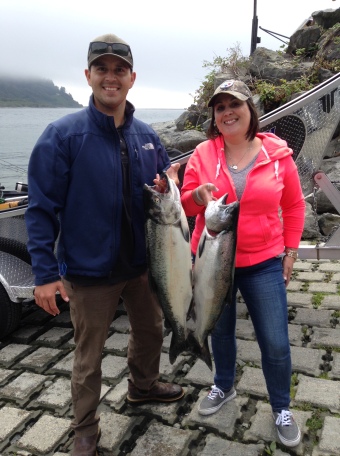 The ocean abundance numbers are in for the Klamath and Sacramento Rivers, and the reviews are mixed. The Klamath stocks hit rock bottom last year, and the bottom wasn’t as far down as first thought. In 2017, 18,410 adult kings were predicted to return to the Klamath. But the actual numbers were much better – 31,838 to be exact. While these numbers still pale in comparison to the average returns (roughly 120,000), at least we’re headed in the right direction. And I think we’re going that way a little quicker than most people thought. At last Thursday’s annual Ocean salmon Information meeting in Santa Rosa, CDFW suggested 359,200 Klamath River fall Chinook adults are swimming in the ocean. At first glance, that’s not a very big number. Especially when you compare it to the 1.6 million Klamath salmon that were in the ocean in 2012. But in reality, this year’s ocean forecast is higher than the average of the previous five years. And you have the 21,903 jacks that returned last fall to thank for that. According to the Preseason Report 1 prepared by the PFMC, 59,733 adults are forecasted to return to the Klamath this fall. With a minimum 40,700 natural-area spawners needed for escapement, we could see a surplus of 19,000 kings this fall. Hopefully we’ll see some type of ocean season along with a fall sport quota in the Klamath basin.

Over on the Sacramento, the numbers weren’t as encouraging. The 2017 preseason ocean abundance was forecasted to be 230,700, but it turns out only 139,997 adult Sac Chinook were in the ocean. Of those, 70,000 were harvested in the ocean and 25,000 were harvested in the Sacramento River basin. That left an all-time low of 44,574 hatchery and natural area spawners. A long way from the expected 122,000. A total of 24,375 jacks were estimated to have escaped to Sacramento River basin hatcheries and natural spawning areas. These numbers equate to an ocean abundance of 229,432 fall Sacramento Chinook adults in 2018. You can count on a restricted ocean season down south as well as changes to the salmon regulations in the Sac basin this year to insure the 122,000 escapement goal is met.

What the PFMC chooses to do with these forecasts will be determined in the next couple of months. Up next, the PFMC is meeting March 8 through 14 in Rohnert Park. The Council will determine if any in-season action for fisheries scheduled to open in April is needed. They will also adopt three regulatory alternatives for ocean salmon fisheries in effect on or after May 1. Final alternatives for public review will be decided on March 14. For information on the meeting, visit, https://www.pcouncil.org. To view the salmon preseason process, visit https://www.wildlife.ca.gov/Fishing/Ocean/Regulations/Salmon/Preseason. To view the PFMC Preseason Report I, visit https://www.pcouncil.org/2018/03/52584/2018-preseason-report-i-available-online/

The weather ahead
A series of small storms will be moving through the region beginning on Wedneday. “The first system will hit Wednesday night and stick around through Thursday morning,” said Karleisa Rogacheski of Eureka’s National Weather Service. “Rainfall totals will be small, anywhere from a tenth to a quarter inch. Another system will arrive mid-day on Thursday and will be with us through Saturday evening. Over the three-day period, the Smith basin could see up to an inch and a half of rain. Down in the Eel and Mad basins, a quarter to an inch is predicted. Sunday and Monday are looking mostly dry, with maybe a few sprinkles. A wetter system will arrive on Tuesday and stick around overnight into Wednesday morning. The Smith basin could see up to an inch, and Humboldt could see up to three-quarters. The next system arrives on Wednesday night, with the Smith seeing an inch or more and Humboldt getting up to three-quarters.”

The Rivers:
Chetco/Elk/Rogue
“The Chetco was in prime shape to begin the week, with good numbers of fish on the upper end,” said Andy Martin of Wild Rivers Fishing. “Many of the guides who fished high hooked four to six fish a day. Fishing was slow on the lower end, however, partly because the river was still high below Loeb. It appears this next storm will blow the Chetco out for several days. The Elk fished well Sunday and Monday, with quite a few fresh fish. It will be the first Southern Oregon river to fish again after the storm.
The lower Rogue was really good over the weekend and early in the week. Some of the guides anchoring and running plugs caught half a dozen or more fresh steelhead, with several hatchery fish. MagLip plugs are working best.”

Smith River
The river is in perfect shape, and there’s some fish around reports Mike Coopman of Mike Coopman’s Guide Service. He said, “We’ve been hooking two to four a day, but landing them is a different story. The water is really cold, it was 39 degrees on Monday so we’re seeing some really light biters. We’ve seen some big fish around this week, and the fishing pressure continues to be light.”

Eel River (main stem)
As of Wednesday, the main was flowing at 8,000 cfs on the Scotia gauge. The river remains muddy from the forks down, and it predicted to rise to 12,000 cfs on Saturday. With more rain predicted for next week, it could be a while before it becomes fishable.

Eel River (South Fork)
The upper South Fork has been fishable for a couple days, and reports are there’s some downers around along with some fresh ones. As of Wednesday, flows were right around 1,800 cfs and dropping. It’s now forecasted to rise beginning Friday afternoon and peaking at 3,000 cfs on Saturday morning. The forecast center is calling for flows to be back under 2,000 cfs by Sunday morning.

Van Duzen
The Van Duzen has also been fishable for a couple days, and bank anglers are catching a few. It’s forecasted to rise on Wednesday night and is predicted to peak at 2,500 cfs on Friday night. Whether it drops back into shape early next week will depend on the rain and snowmelt.

Mad River
A few fish are being caught, but it’s not red hot reports Justin Kelly of RMI Outdoors in Eureka. “The fish that are being caught have been super bright. The river is in good shape, with two to two and a half feet of visibility as of Wednesday. It looks like it will blow out beginning Wednesday evening and will likely be muddy through the weekend.” Kelly added.