In a process that had more twists and turns than San Francisco’s Lombard Street, the Pacific Fishery Management Council (PFMC) on Wednesday released three preliminary alternatives for managing salmon fisheries from Humbug Mountain (OR) to Horse Mountain (which includes Humboldt County). According to the PFMC, 359,200 Klamath and 229,432 Sacramento fall Chinook are said to be swimming in the ocean, which should provide what we didn’t have last year – opportunity. As you recall, in 2017 the California KMZ was completely shut down, as was the Klamath River fall Chinook fishery. So the fact that we have a season this year is a huge step in the right direction. The three alternatives that are currently on the table:

All three scenarios are the same, two fish per day, seven days a week, Chinook only, 20-inch minimum size. To view all of the salmon management alternatives, visit https://www.pcouncil.org/wp-content/uploads/2018/03/E6a_Supp_STT-Rpt1_MarBB2018.pdf

Next up, the PFMC will tentatively adopt final regulatory measures for analysis by the Salmon Technical Team during the April 5-11 meeting to be held in Portland. More information is available at http://www.pcouncil.org. 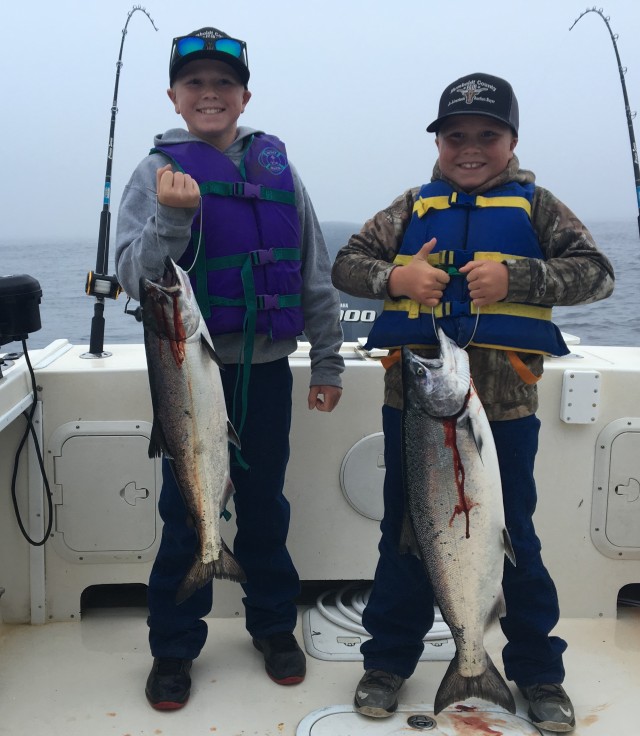 Brothers Nathaniel (left) and Finnigan Holmes of Loleta hold a pair of kings taken during the 2016 ocean salmon season. After a full closure in 2017, the North Coast is slated to have an ocean recreational salmon season in 2018. Season dates and lengths will be determined in April. Photo courtesy of Marc Schmidt/Coastline Charters

Klamath/Trinity fall salmon allocations
Not only will we have a recreational ocean salmon season, sport anglers will have an opportunity to harvest Klamath River fall Chinook this year. The recreational allocations, or quotas, as proposed by the PFMC will range from 5,762 to 1,785 adult fall Chinook in 2018 across the three alternatives. Tribal allocations run from 17,568 to 12,083 adult fall Chinook. These numbers are not final, next step is public review with a decision coming from the PFMC meeting on April 5-11. Once the quota is agreed upon, 50 percent will go to the lower Klamath basin, 17 percent to the upper basin, and 33 percent will be allocated for the Trinity River. When adopted, these quotas will go into effect August 15, 2018.

Weekend weather
A wet pattern will continue to hang around the North Coast for the next week according to Ryan Aylward of Eureka’s National Weather Service. “The next system will hit Thursday morning, and it’s going to be a colder system with snow expected at the 2,000 foot level,” said Aylward. “Rainfall totals could reach three-quarters along the coast. Rain will taper off on Friday, but we could see another quarter-inch. Lingering showers are likely into Saturday morning, but the weekend and into Monday should be relatively dry. Another fairly large system is sitting off the coast that’s expected to arrive on Tuesday and Wednesday, but right now we’re not sure where it’s going to hit. Expect showers to stick around through next week.”

Brookings ocean report
The ocean out of Brookings has been fishing very well in between storms for lingcod and rockfish according to Andy Martin with Brookings Fishing Charters. He said, “With high water from the Chetco, boats are having to run up toward Bird Island to get into the fish, but the lings and nice-size rockfish are biting well. The deeper spots, from 80 to 120 feet, seem to be fishing best. Fishing for surf perch off the beaches near Brookings has been very good, with plenty of redtail and striped perch.”

The Rivers:
Chetco/Elk
According to Martin, the Chetco dropped enough for drift boats to get on the water Monday, with most of the upper river guides catching a mix of fresh and spawned out steelhead. “Heavy rain Monday night sent the river from 4,000 cfs to 10,000 cfs on Tuesday, and now it looks like it will be blown out all week. A few boats got into some steelhead on the Elk on Monday and again Tuesday, even though the river was on the verge of blowing out.”

Smith River
Since late last week, fishing has been tough on the Smith reports Mike Coopman of Mike Coopman’s Guide Service. He said, “I fished over the weekend and it was a grind. There’s some downers around, but I didn’t see many new fish. Between lack of fish and the seals, conditions aren’t very good right now.”

Eel River (main stem)
Running at 17,000 cfs on Wednesday, it will need a couple weeks of dry weather before it drops into fishable shape.

Eel River (South Fork)
As of Wednesday, flows were 3,200 cfs on the Miranda gauge and predicted for another rise Friday afternoon. Depending on snow melt, it could be fishable by sometime early next week.

Van Duzen
Hovering just above 2,500 cfs, as of Wednesday, it will take a week or more of dry weather for it to turn green. There’s lots of snow in the hills, which will keep the flows high through the weekend and into early next week.

Mad River
The Mad is currently running high and dirty, and not many anglers are fishing reports Justin Kelly of RMI Outdoors in Eureka. He said, “There were a few fish caught on Sunday and Monday prior to it blowing out, but not much happening since.” Flows are predicted to stay above nine feet through the weekend and into early next week.