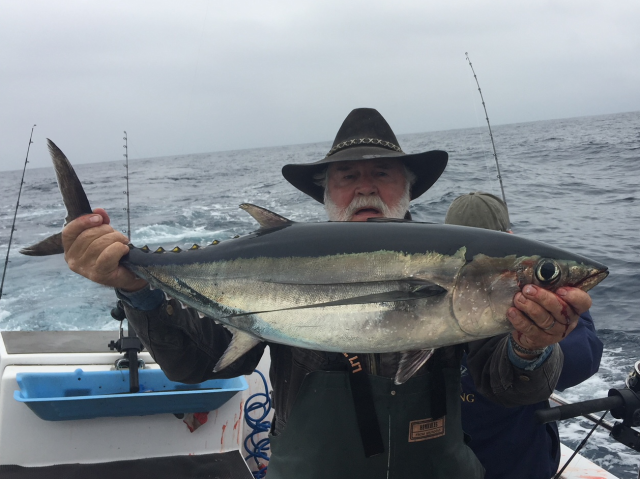 Tuna fishing remains all the rage on the North Coast. While Eureka took their turn at the tuna last Wednesday, boats launching from Fort Bragg and Shelter Cove have had their way with the longfins the last couple days. The warm water was as close in as 20 miles from Fort Bragg on Tuesday, but it sounds like the fish were found in big numbers roughly 30 miles from the entrance. Scores ranged from 20 fish per boat all the way to the high 50’s. Most everyone caught all they could handle. A few of the Shelter Cove boats got in on the action as well, but it was a much longer boat ride to the fish. Jake Mitchell of Sea Hawk Sport Fishing started out south of the Cove at Vizcaino Knoll where the fishing was decent. They had a few in the box, but the radio chatter coming from Fort Bragg sounded too promising. So they picked up and ran another 20 miles south to where the Bragg boats were doing some heavy conking. Arriving around noon, they started really catching and put 31 albacore to 31-pounds on board over the next few hours. Looking to get in on the tail end of the warm water, Marc Schmidt of Coastline Charters ran west out of Eureka on Tuesday to where the boats left em’ biting last week. The warm water had pushed out and up to roughly 50 miles from the entrance. They were rewarded for their efforts with 24 nice albacore, with most in the 11 to 15 pound range. A couple other boats were planning on running out of Eureka on Wednesday, but I didn’t hear any scores. This looks to be the end of the week-long tuna spree as the wind is forecasted to blow through the weekend. Hopefully it won’t be too long before the tuna water comes within reach, again.

The northerly winds will return on Thursday, and it looks like they’ll stick around through the weekend.  Friday’s forecast for coastal waters from Point St. George to Cape Mendocino out 10 nautical miles is calling for N winds 5 to 15 knots with 6 foot swells at 7 seconds out of the NW. The forecast for Saturday is calling for N winds up to 10 to 20 knots, with swells to 6 feet at 7 seconds. Sunday’s forecast is for NW winds 5 to 15 knots and N waves 6 feet at 6 seconds and NW 2 feet at 12 seconds. These conditions can and will change by the weekend. For an up-to-date weather forecast, visit www.weather.gov/eureka/. You can also call the National Weather Service at 707-443-7062 or the office on Woodley Island at 707-443-6484.

According to Dan Troxel, an Environmental Scientist on the Klamath River Project, 190 adult salmon have been harvested from the Highway 96 bridge at Weitchpec to the Klamath mouth towards the quota of 1,745. Of those, 105 adults were caught below the Hwy. 101 bridge. The spit fishery will close when 523 adults are caught below the 101 bridge. Only the spit area will close to fishing once this quota is met, fishing will remain open upriver of the spit until the 1,745 quota is met. Anglers may keep track of the Klamath and Trinity river quotas by calling 800-564-6479. For Klamath and Trinity fishing regulations, visit http://www.eregulations.com/california/fishing/supplement/klamath-river-basin-regulations/.

Installation of Willow Creek weir for the 2018 trapping season began on Wednesday, August 22 according to Mary Claire Kier of the CA Department of Fish and Wildlife – Trinity River Project. “The weir will be in the same location as last year,  just upstream of Trinity River Farms,” said Kier. “We have a new submerged boat gate this year which we believe we have designed to allow rafts and boats to float over. There is signage indicating where it is, and it is the only part of the weir line that doesn’t stick up a couple of feet. We have located the boat gate on the Hwy 96 side of the river (river left, headed downstream), and believe that we’ve left enough space for boaters to comfortably navigate the culvert that is stuck in the riverbed below us. There will be a fish trap in the river upstream of the weir line, but just river right of the gate. The weir site will be staffed 24/7 for the duration of the season, so if you need help please ask,” said Kier.

On Friday Aug. 24, flows released from Lewiston Dam into the Trinity River will be reduced from 800 to 700 cfs.

A fairly quiet week for the Eureka fleet due to rough weather on the outside. The best option was the California halibut inside Humboldt Bay. “The halibut were back on the rip now that we have some good tides,” said Tony Sepulveda of Shellback Sport Fishing. There’s plenty of fish around, and some big ones too. We’ve seen a few 30-pounders this week. It seemed there were more fish up in the North Bay, but they tended to be smaller. The bigger fish were coming from the deeper channels. When the weather has allowed, the rockfish bite is still wide-open at the Cape. The lings have been really big, we had six over 20 pounds on a recent trip,” added Sepulveda. A few boats found some salmon out of Eureka on Wednesday south of the entrance on the 40-line in 175 feet of water. Reportedly the fish were a pretty good grade. That’s the first real good salmon report in over a week and should give the boats a pretty good starting point for Thursday.

The salmon bite has all but dried up, but the rock fishing remains strong reports Curt Wilson of Wind Rose Charters.  He said, “It’s been pretty easy to get your 10 rockfish, with a nice mix of blacks, blues and yellowtails. We’re seeing a real good variety lately.  The ling cod bite remains tough, I don’t think there’s a ton of them around.”

The salmon bite has slowed down since late last week according to Mitchell. “We did really well on salmon last Thursday, had limits of 12 by 10:30. The water was flat that day so we came in filleted the salmon and went back out with my dad and caught 11 tuna. Friday and Saturday we did salmon and rockfish combos. The rock fishing was good down off the Ranch House, but the salmon bite slowed significantly and we only got a few over those few days.”

There aren’t many salmon around, but the rockfish bite has been really good this week reports Leonard Carter of Crescent City’s Englund Marine. He said, “There hasn’t been any effort on the salmon lately. It closes on Sept. 3, so I think it’s about over. The rockfish action has been good at all the usual spots. The lings have come back on bite too. There’s also been a real good perch bite at South and Kellogg beaches as well as the mouth of the Smith River. A few sharks were caught earlier in the week, but that has slowed since,” Carter added.

Rough weather kept boaters close to Brookings for the weekend and early part of the week reports Andy Martin of Brookings Fishing Charters. “The ocean was flat on Wednesday. A few salmon are being caught just off the mouth of the Chetco,” added Martin.

The steelhead fishing remains solid and we’re catching a few salmon reports Mike Coopman of Mike Coopman’s Guide Service. He said, “There are quite a few salmon around, but I think with all the pressure, they aren’t in the biting mood. There’s still some moss coming down and the lots of boat pressure – I think that has a lot to do with the salmon not biting as well as they should be. The number of adult steelhead and half-pounders around however, is more than making up for the lack of salmon,” Coopman added.

The Rogue fished well over the weekend with limits for most guides according to Martin. He said, “Scores were down to a fish per rod Monday and Tuesday. On Wednesday the morning incoming tide took off. Anchovies with green blades are working best. Some salmon have now moved above the bay.”