The finish line is right around the corner for what can best be described as a very unfulfilling recreational salmon season on the North Coast. It began back in June with tons of excitement and optimism ­­— having zero opportunity in 2017 will do that. The year-long hiatus and the fact that roughly 360,000 Klamath River adult kings were said to be swimming off the coast had the saltwater community buzzing. The season started off with the ocean completely loaded with small kings and silvers, and they were still here as of Wednesday. There were plenty of times where a good bite materialized, but they never lasted longer than a couple days. The one positive that can be taken away from this season is the number of undersized kings. While the 360,000 Klamath adults never did really show themselves in big schools, it’s hard not to feel good about the future. The sheer volume of small kings bodes well not only for next years ocean season, but also for the rivers.

The ocean sport salmon season will be closed after Monday, Sept. 3 from the CA/OR border to Horse Mtn. The season will remain open through Oct. 31 from Horse Mtn., which includes Shelter Cove, south to Pigeon Point. For more info, visit https://www.wildlife.ca.gov/fishing/ocean/regulations/salmon.

On Saturday September 1, people may fish California’s waters without a sport fishing license. All regulations, such as bag and size limits, gear restrictions, report card requirements, fishing hours and stream closures remain in effect. On Free Fishing Days, every angler must have the appropriate report card if they are fishing for steelhead, sturgeon, or salmon in the Smith and Klamath-Trinity River Systems. For more information visit, https://www.wildlife.ca.gov/Licensing/Fishing/Free-Fishing-Days

Ocean conditions for the long weekend aren’t looking great as stronger northerly winds and steep seas are expected to return Friday and Saturday. Friday’s forecast for coastal waters from Point St. George to Cape Mendocino out 10 nautical miles is calling for N winds 5 to 10 knots with 3-foot swells at 5 seconds and 4 feet at 10 seconds out of the NW. The forecast for Saturday through Monday is fairly consistent, with NW winds 5 to 15 knots and swells 6 to 7 feet at 7 to 8 seconds. These conditions can and will change by the weekend. For an up-to-date weather forecast, visit www.weather.gov/eureka/. You can also call the National Weather Service at 707-443-7062 or the office on Woodley Island at 707-443-6484.

The Pacific halibut season will re-open on Saturday, Sept. 1 and will remain open through Oct. 31, or until the quota is reached, whichever is earlier. Through August, the CDFW has projected 23,781 net pounds have been harvested towards a quota of 30,940 pounds, leaving only 7,159 pounds left to catch.  For up-to-date harvest tracking information, visit https://www.wildlife.ca.gov/Conservation/Marine/Pacific-Halibut#31670772-in-season-tracking.

According to Dan Troxel, an Environmental Scientist on the Klamath River Project, 639 adult salmon have been harvested from the Highway 96 bridge at Weitchpec to the Klamath mouth towards the quota of 1,745 as of Sunday, Aug. 26. Of those, 226 adults were caught below the Hwy. 101 bridge. The spit fishery will close when 524 adults are caught below the 101 bridge. Only the spit area will close to fishing once this quota is met, fishing will remain open upriver of the spit until the 1,745 quota is met. Field samplers will be surveying below highway 101 bridge on Monday and Thursday according to Troxel. Counts will be monitored closely as the holiday weekend approaches and necessary decisions will be made on Friday if needed.

The Trinidad Pier Youth Fishing Tourney will take place on Sunday, Sept. 9 from 10 a.m. to 2 p.m. The free event is open to all children ages 6 to 15. Prizes will be awarded in each category and fishing gear and bait will be provided. An adult must accompany children. Hot dogs and refreshments will be served following the event. Catch and release is encouraged and no fishing license is required. Look for the sign-up table on the Trinidad Pier. For more information, contact Ken Jones at kenjones@pierfishing.com. 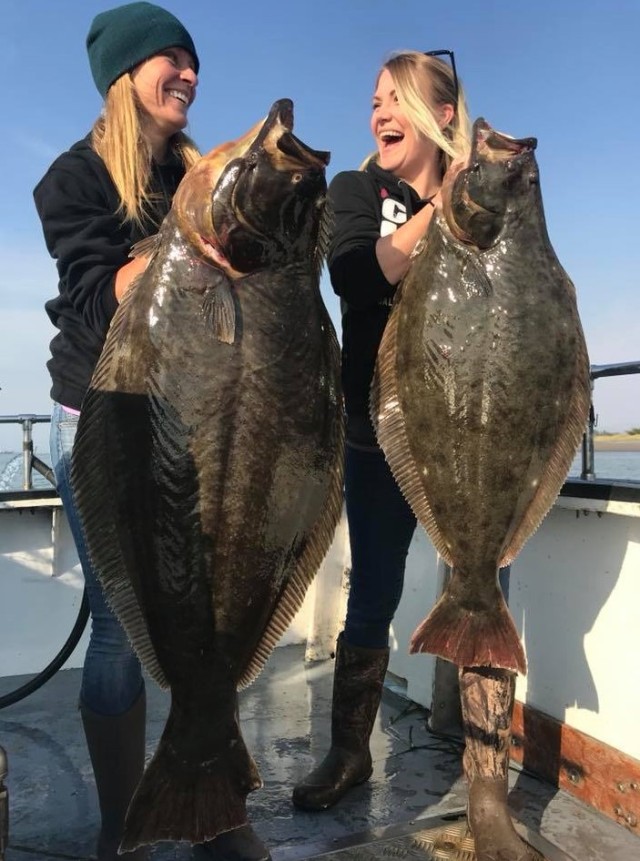 Julie Rofman, left, along with Colleen May Madden have plenty of reason to smile after catching a couple of large California halibut while fishing in Humboldt Bay last weekend. Photo courtesy of Tony Sepulveda/Green Water Fishing Adventures

The ocean has been rough since last Friday, and there hasn’t been much activity on the outside according to Tim Klassen of Reel Steel Sportfishing. “There was a pretty good salmon bite last Wednesday and Thursday just north of the Eel Canyon. There were some limits reported, and some nice fish were landed. Since then, it’s been California Halibut inside Humboldt Bay where the fishing remains excellent. We’ve been able to catch limits on the last three trips, but we’ve had to bounce around a bit. You’re getting one to two per spot before it dries up, there doesn’t seem to be any big concentrations of fish,” Klassen added.

After last weeks tuna runs, Jake Mitchell of Sea Hawk Sport Fishing has been fishing for salmon out front of Shelter Cove since the weekend. He said, “It hasn’t been red hot, but we’ve gotten our limits every day but one. The limits aren’t coming quick, you have to be willing to put in the time, but there are some fish around.”

According to Chris Hegnes of Crescent City’s Englund Marine, Thresher sharks remain the focus for anglers fishing out of Crescent City. “There’s been about 10 boats every day trolling along South Beach. From what I’m hearing, high tide has been the most productive. Guys are trolling green label herring behind a banana weight. The weather hasn’t been great on the outside, so not many boats have been out for rockfish or salmon,” Hegnes added.

Salmon season on the Oregon side of the KMZ closed on Sunday according to Andy Martin of Brookings Fishing Charters. “Windy weather made fishing tough the last week of the season. The ocean out of Brookings is expected to finally settle down on Thursday and Friday,” added Martin. 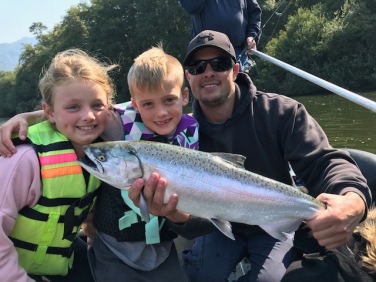 The river came up quite a bit this week from releases at Iron Gate, and the river got pretty mossy reports Mike Coopman of Mike Coopman’s Guide Service. “Most of the boats saw a decline in scores due to the moss, but there’s plenty of fish around. Pushes of fresh salmon have been coming daily, but they’re moving really fast. The best bite has been first thing in the morning, and you’ll want to find that spot that no one has beat on. The fishing and boat pressure have been really putting them off the bite. Along with a mixture of jack and adults, we’re still caching our share of adult and half-pound steelhead,” Coopman said.

The Rogue Bay slowed somewhat as many of the kings holding in the bay shot upriver with cooler water temperatures according to Martin. He said, “Fresh salmon showed up Sunday, Monday and Tuesday but it took a few hours per fish for the guide boats to get a fish a rod. The bite began to switch over to a morning bite on Tuesday.”